Jorge Arreaza: The government is protecting the opposition from itself

The Vice-president Jorge Arreaza yesterday addressed a group of foreign diplomats accredited in Venezuela and, according to the Agencia Venezolana de Noticias, “alerted over the media manipulation of the national political scenario that is promoted by the right-wing ahead of the December 6 elections, as part of their plan to sabotage them.”

Arreaza said: “The media attacks against Venezuela every time there are elections are terrible. There is a pattern here, a planned and well-rehearsed script.

Arreaza also repeated the government version according to which the leader of opposition Party Luis Manuel Díaz was killed as part of a settling of scores between organized gangs fighting for the control of Guárico State’s criminal activities. Arreaza said that Díaz had belonged to the gang of “Los Plateados.”

The Vice-president added that the Venezuelan government has information that the “ultra-right” is planning to commit “political crimes with the aim of generating confusion and of blaming the government for such crimes.”

According to him these rightists groups are paying between 30,000 and 60,000 dollars to sicarios for the assassination of Lilian Tintori, wife of jailed opposition leader Leopoldo López, as well as other opposition figures. President Nicolas Maduro had previously also declared that “the right” is paying people “up to $50,000 to generate violence in Venezuela.”

Fortunately, declared Arreaza, “the government is offering protection to Tintori and to other opposition leaders that are showing up in intelligence lists as targets.”

The Venezuelan government backed news channel Telesur is also running a series of pieces claiming that the opposition is falsely accusing PSUV militants of electoral violence and that the recent attacks on opposition electoral meetings is all part of a plot that includes paid sicarios dressed as PSUV supporters. In this article, “The false attacks against the MUD in Venezuela,” Telesur explains that it suspects that the immediate complaints by the MUD of alleged attacks were planned in cahoots with the Secretary General of the Organization of American States, Luis Almagro, the European Parliament, and the United States Embassy in Caracas.

In a not very subtle attempt to criminalize the opposition parties umbrella organization Mesa de la Unidad (MUD), Telesur is running via twitter (@teleSURtv), under the hashtag #MUDmafiososYasesinos, this information about the “Criminal network of the Venezuelan ultra-right” already published in August. 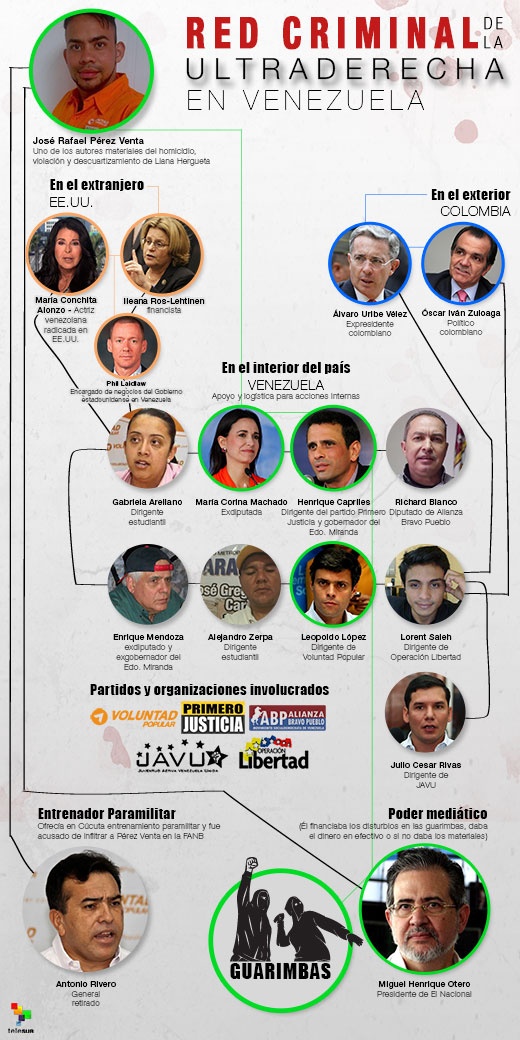 Electoral coup according to Telesur

Here is an interesting “infographic” by Telesur. It shows the “five stages of the electoral coup in Venezuela,” which would be staged by the opposition for the December 6 legislative elections.

“Why are United States officials so sure that there will be a complex scenario in Venezuela? Because there is a five stage plan to stage an electoral coup,” informs Telesur.

The first stage is a media strategy using “mass psychology.” This media strategy aims at producing “manipulated tendencies [showing] an opposition victory.” Recent polls that show a 35 points lead for the opposition can surly be dismissed as part of the conspiracy. Also part of this stage is the “magnifying” of issues such as insecurity, scarcity, and the violation of human rights. These are issues are most obviously not a real problem in Venezuela and are part of a media construction.

The second stage of the plot is to denounce an electoral fraud. In order to do this the opposition is asking for “intervention of international observers and the United Nationals System.”

The “consolidation” of International support for the opposition is part of the third stage. The usual conspirators such as Alvaro Uribe and Felipe González are mentioned, but also organizations such as the Konrad Adenauer, and the Friederich Ebert foundations and FreedonHouse.

Opposition street mobilization is the fourth stage, “especially in the State of Táchira and other frontier states.” According to the document the opposition has been hording t-shirts “with the symbols of the PSUV”. Opposition militants would dress as pro-government supporters and attack electoral centers and State media facilities. The document directly accuses an opposition candidate for the State of Barinas, Freddy Superlano, a person “with close links to Tintori,” as the “strong man” for this part of the plot.

The fifth and last stage will “achieve that medical centers are not in condition to open during the days before and after the elections to take care of the wounded.” How the opposition could effectively close government controlled public health facilities, is not explained in the document.

The main evidence of this conspiracy is, for Telesur, are recent declarations by John Kelly, current chief of the United States Southern Command, and by Thomas Shanon, Counselor of the United States Department of State, that the “White House is closely following the Venezuelan electoral process,” and a recent visit to Caracas of a “parliamentary rights-wing European group,” which met the local opposition.

The source used by Telesur for this document is also interesting: Hugo Moldiz Mercado, a Bolivian politician who was briefly Minister of Government in his country in 2015.