The leader of the group Guardianas de Chávez, National Assembly representative Rosa León (PSUV), announced today that her group will gather signatures in several cities for a petition, addressed to “the competent agencies,” to “investigate the causes that took away the life of the Leader of the Bolivarian Revolution Hugo Chávez.”

The day for the signatures gathering drive has been set for December 10, UN Human Rights Day: An appropriate date, according to Rosa León, since “the Comandante was deprived of his right to live, and not only that, but time is passing and he is now being [posthumously] deprived of his right to justice, as the investigation into the causes of his death has not been initiated.”

Time is crucial to protect the human rights of Chávez, considers Rosa León, because the “murderers could have already escaped, especially since the intellectual authorship [of the crime] came from the Empire.”
Publicado por Hugo Pérez Hernáiz en 12:54 PM No comments:

Email ThisBlogThis!Share to TwitterShare to FacebookShare to Pinterest
Etiquetas: Magnicidio, The Empire

Here is yet another twist to the theories about the death of Chávez made in Venezuela.

Someone by the name Anonymous Venezuela publishes this video claiming to show the recording of a meeting of Cuban militaries planning the Venezuelan post-Chávez transition.

A masked man with his voiced electronically dubbed presents the recording, and claims that the “ex-terrorist” Teodoro Petkoff and the whole of the MUD leadership, including Capriles and Leopoldo López, have known of this recording for a long time but have failed to make it public. The presenter argues that this shows that the opposition leadership is as corrupt and “perverted” as chavismo. Honorable exceptions are made for Diego Arias and Brazilian soothsayer Reynaldo do Santos, whom the presenter thanks for all the support they have given to Anonymous Venezuela.
The voices of three men with Cuban accents can be heard in the actual recording. They address each other with military ranks (“coronel” is heard at least twice,) but names are not audible. After discussing broad geopolitical differences with Venezuela (Cuba would like a Greater Socialist Cuba with Nicaragua and Venezuela as subsidiary territories, but Chávez seems to prefer a Greater Colombia along Bolivarian lines,) the participants agree that Chávez is not the right leader for the moment as he is not pliable enough to Cuba. Chávez should be therefore taken to the island for the final stages of his terminal illness (one of the participants suggests that the illness is not real and that it is something "they" have made Chávez believe.) The leading participant issues the order that once Chávez is out of the way, Diosdado Cabello should also be “dealt with” and that the end of Cabello would also mean the end of Capriles (“Two birds with one shot” he claims, although he doesn’t explain exactly why.) They all agree that the man to substitute Chávez is Nicolas Maduro because he is “docile” with Cuba. The meeting ends with the sound of a brief phone conversation between Raul Castro himself and the leader of the meeting: Castro asks if all the instructions have been made clear and the other man responds that all is in order.

(Thanks to Lissette González for the link)

During the graduation ceremony of more than 5,000 police officers of the Universidad Experimental de la Seguridad (UNES), Interior and Justice Minister Miguel Rodríguez Torres told the new officers that their duty is to fight against “those who conduct operations to destabilize the country with political aims.”

“You [graduates] are going into active service in a historic moment for the Fatherland, a vital moment for the Bolivarian Revolution. At a time when the right, the forces of evil, want to achieve their bastardly political aims through violent means,” said Rodríguez Torres.

In his speech at the same ceremony, President Maduro added that the UNES should establish a research program on “economic crimes.” Research would focus on “the economic crimes we have been discovering every day and that have produced such indignation.”

Later in a television interview, Minister Rodríguez Torres also gave details of the conspiracy plans the police officers will have to face: “We cannot openly reveal who is conspiring against the country, but they are being permanently watched. We have the certainty that the conspiracy plans exist. (…) The conspiracy has always been the same one, what has changed through the years has been the methodology; this is why we have seen coups d’état, oil industry sabotages, events at Plaza Altamira; the [conspiracy] plans have evolved.”
Publicado por Hugo Pérez Hernáiz en 4:55 AM No comments:

Email ThisBlogThis!Share to TwitterShare to FacebookShare to Pinterest
Etiquetas: Economic War, The Right

Inflation in 2013 was “criminally induced, product of an economic war that aimed at taking our country to chaos,” explained yesterday President Maduro. However, thanks to the “economic offensive” of the government in the past weeks, he also believes that in the month of November prices should have been reduced by at least 5%.

“In November, according to our research, inflation should be minus 5% [-5%], because many products have been reduced by half. Will technicians from the Venezuelan Central Bank (BCV) and the National Statistics Institute (INE) realize what has been going on here and dear to go beyond technocracy and technology?” asked Maduro and further warned that officials of the BCV and INE should “go deeper and discover the phenomena of the economic offensive so that they can see [the truth].”

He also argued that his offensive against the economic war has generated “a new economic climate, but this can only be fully accomplished if society reacts and faces the harm that the trilogy of evil [opposition leadership] has done to the country. The People know who is really responsible for the economic war.”
Publicado por Hugo Pérez Hernáiz en 6:34 AM No comments:

Yesterday the National Assembly approved the law granting President Maduro especial powers to rule by decree. Maduro had asked the Assembly for those powers, at first instance to fight corruption, but lately to also to fight the “Economic War” he claims is being waged by the enemies of the Fatherland.
After receiving the published law from the President of the National Assembly Diosdado Cabello, Maduro addressed a crowd of supporter outside the Presidential Palace. The event was transmitted in cadena by all radio and television channels of the country.

Maduro affirmed that he will continue taking economic measures to “safeguard the income of People”, but that the end result should be the defeat the capitalist ethics of consumerism and “to allow for the construction of a new human and socialist ethics, an ethics of honesty.”

He also emphasized his own conspiracy explanation of the current economic situation in Venezuela: The main agents of “economic sabotage” are, according to Maduro, the three main business owners unions CONSECOMERCIO, FEDECAMARAS, and VENENCHAM. These agents of the “parasitic bourgeoisie” are politically supported by what he calls “the trilogy of evil”, meaning opposition leaders Machado, López and Capriles. They are all in cahoots with the ultimate agent of the economic war, the US Empire.

Maduro also advanced that the first measure he will take using his new powers will be to ask the Supreme Tribunal (TSJ) to grant the status of “Organic Law” to his recent decree that limits business profits to up to 30%. Maduro denied that his recent measures are unsustainable and that they will create shortages because, according to him, “99% of the shops we have visited had received official rate dollars. It is false that there will be shortages. We have come up with a control system for stocks, and all the factories and shops are full. They have [stock] reserves to last them for a year.”
Publicado por Hugo Pérez Hernáiz en 4:16 AM No comments:

Currency exchange houses and banks in the Colombian frontier city of Cúcuta freely transact with Venezuelan Bolívares and Colombian Pesos. Internet pages reporting the black market exchange rate Bolívares/Dollars only have to call these houses in Cúcuta to update the market value of the Bolivar Fuerte.

Not according to Venezuela’s Foreign Minister Elias Jaua: Yesterday he explained in a press conference that “the speculation phenomenon is produced by a ghost dollar that doesn’t really exist and that is ‘regulated’ by web pages that every day make up a different price. Shop owners then look at these pages and change the prices of their products according to the dollar that has been fixed by a conspiracy installed in Miami.”

According to Jaua this is all part of the “economic war” that was planned by the bourgeoisie during 14 years to remove the Revolution from power.

The government has so far blocked access from Venezuela to 50 web pages that reported the price of the “parallel Dollar” in Bolívares Fuertes.
Publicado por Hugo Pérez Hernáiz en 6:38 AM No comments:

The Empire is using local union leaders in its economic war


In yesterday’s press conference President Maduro insisted in the main themes of his theory about an “economic war” being waged by the enemies of the Fatherland. The Empire, the “parasitic bourgeoisie”, “the trilogy of evil”, and the leaders of the local business unions FEDECAMARAS and VENAMCHAM, were all mentioned as actors of this war.

Maduro gave a few new details of this vast conspiracy he claims is behind the economic war. He informed that the US embassy officials ordered to leave the country early last month had gone to Bolivar state to “meet several leaders, one of those leaders was to be in charge of the general power blackout, they talked about it just like that, openly. Another leader was to infiltrate SIDOR [state steel industry], and according to our data they had co-opted two union leaders in order to stop it [SIDOR] indefinitely and to leave the country without steel. And yet another [agent] would co-opt people form the opposition and finance them.”

The public “Basic Industries” of the Guayana region have been the source of labor unrest and intermittent strikes since last year.
Publicado por Hugo Pérez Hernáiz en 7:19 AM No comments:


Today’s press conference has just started minutes ago with President Maduro lamenting the coverage of Venezuela by international media: “It is biased and partial against our country. (…) You [international media] have made the world believe that there is chaos here. You don’t know what real chaos and violence are!”

Worth mentioning is the background artwork of the conference: Four paintings in the beautiful socialist realist style now favored by the government.

Three of the paintings are within the frame of the camera. Between Minister Arreaza and Maduro, Chávez in deep though, with Bolivar as guiding figure in the back, and a planet, which the Comandante Eterno is presumably planning on saving from Capitalism. Next, Chávez giving instructions, also with Bolivar in the background, and a map of South America. The third painting,
partially covered by Minister Ramírez, is as a Kim IL Sung style portrait of Chávez under blue skies, saluting the People.

What is Chávez doing in the fourth picture? The camera does not yet show. Maybe later.

Here is a picture of the conference published by El Universal: 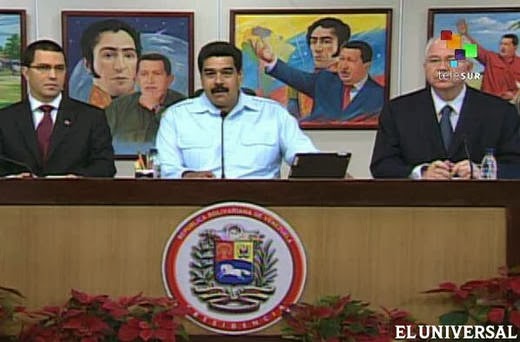 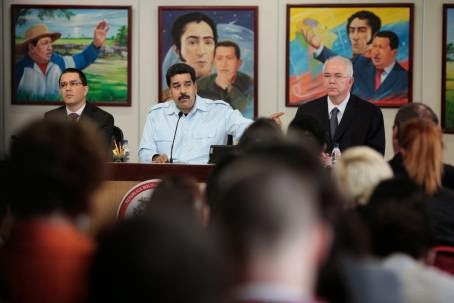