This excellent article by María Páez Victor, neatly packs into one most of the sometimes disperse conspiracy theories the Venezuelan government has been deploying in recent years.

Páez Victor breaks what she calls “the cacophony of misinformation about Venezuela,” by mostly repeating the cacophonic themes of the government’s media apparatus (Unfortunately, the links to the many endnotes in her article do not seem to be working.)

Hybrid War is the all-encompassing name Páez Victor uses for the “second generation” warfare the Venezuelan government claims its enemies are waging. Explains the author: “Hybrid warfare, or war of the second generation, is ‘a military strategy, which employs political warfare and blends conventional warfare, irregular warfare and cyber-warfare with other influencing methods, such as fake news, diplomacy, lawfare and foreign electoral intervention’.” (quoting an unknown source as the endnotes are broken.)

Páez unfortunately only glosses one of chavista’s favorite conspiracy themes “The untimely and mysterious death of Hugo Chávez.” She does, however, pay special attention to the “Cyberattack on the electricity system” as an explanation for the most recent electricity blackouts. Despite the immense disruption the blackouts have produced, Páez finds “however remarkable beyond any expectation that no riots, no social unrest occurred: the people were calm, knowing they were under attack and that this was not the inefficiency of their government.”

Follows a long reconstruction of Venezuelan history as a class-racial-antiimperialist struggle, leading up to Hugo Chávez hierophany and the creation of a new popular state, now at war with a “fascist force backed by the USA.”

Here is an example of classic conspiracy theory argument building: make reference to the previous time you have claimed the existence of a conspiracy as evidence of the truth of your claim, and insist on the plausibility of the conspiracy event, as it can happen elsewhere or has happened before.

Pro-government webpage Misión Verdad claims via Twitter that the latest blackout to hit Venezuela was caused by an electric-magnetic attack. As the government has claimed many times before.

Misión Verdad adds as a notable coincidence that the “new attack against the electro-magnetic pulse of the National Electric System,” happened only three days after an incident with a United States plane of the coast of Venezuela.

Also cited as evidence by Misión Verdad, a report published in the New York Times claiming that the United States is escalating “online attacks on Russia’s Power Grid.” That such attacks are a possibility has been taken as evidence by Venezuelan government media that they were actually carried out against the country’s power grid. Telesur, commenting the NYT article, says: “It seems that Venezuela was a testing ground for the Trump administration in deploying more aggressive tools to interfere with the infrastructure of non-aligned countries. The current reports make the allegations of the Venezuelan authorities a lot more plausible.” 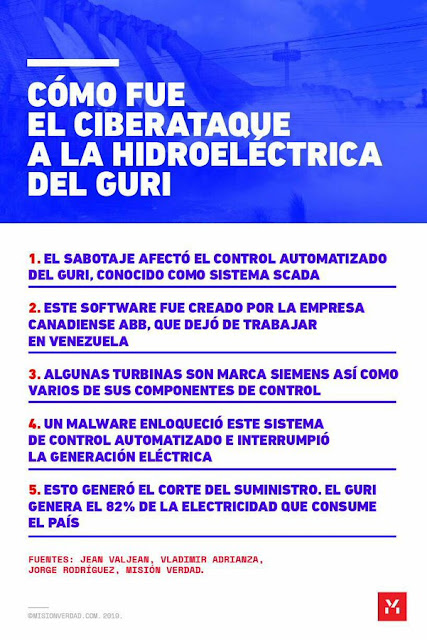 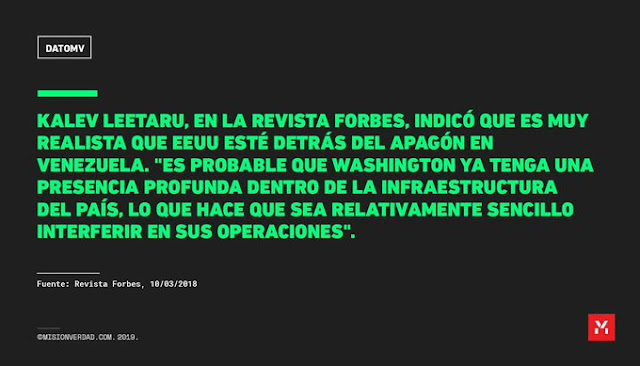 Vice-president of Communication, Tourism, and Culture, Jorge Rodríguez, has declared that yesterday’s nation-wide blackout, the third since March, was caused by an electro-magnetic attack.

“The first indications form our investigations in Bajo Caroní, point to the existence of an attack of an electro-magnetic character, which was aimed at the hydroelectric generation system of Guayana, the main provided of [electric] service in the country,” said Rodríguez.

Fortunately, according to Rodríguez, the Electric High Command (Estado Mayor Eléctrico) has “activated the mechanism to deal with this contingency.”

“Those who have attacked in different ways the Venezuelan people, will again witness the steel (temple) and the courage we, the daughters and sons of our Liberator Simón Bolívar, have shown,” ended Rodríguez his report.

Via Twitter, Nicolás Maduro said: “Faced with the criminal attack against the tranquility and peace of the Fatherland, the Bolivarian Government and the Armed Forces are deployed, attending the needs of the people. The sons and daughters of Bolívar will once again show our unbreakable will. We shall overcome! (¡Venceremos!).” 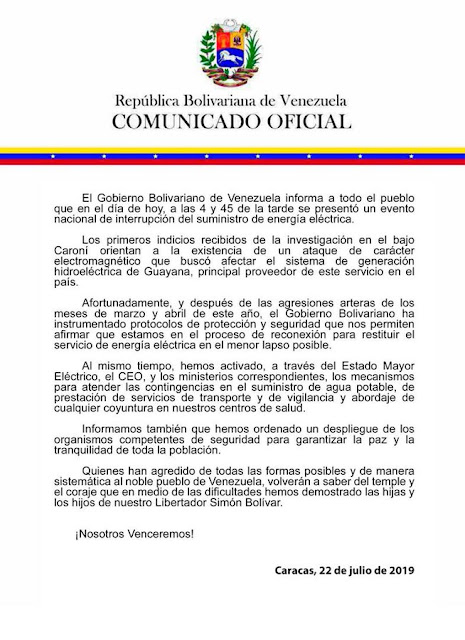 Opposition leader Maria Corina Machado warns in a recent video published via her party’s Twitter account (@VenteVenezuela) that the opposition must not “fall in the trap created by the Maduro regime of the so-called dialogue and farce elections.”

Machado, herself the target of accusation by the Venezuelan government of being the mastermind of a plot to assassinate Maduro, seems to however subscribe the government’s conspiratorial discourse about an “unconventional conflict.” But she claims this war has been unleashed by the government against the rest of the word. “The Venezuelan criminal State has unleashed an unconventional conflict in coalition with terrorist groups such as the ELN, the FARC, Hezbollah, Hamas, drug cartels, and the Cuban tyranny, and they will not let go of the Venezuelan territory, resources, and institutions, unless they are confronted with a stronger liberating force of those democratic actors in the region that understand what’s at stake,” says Machado.

Machado also speaks of the catastrophic consequences if Maduro were to remain in power. The main issue, according to her, is the problem created for the region by the exodus of millions of Venezuelans. Some of the consequences of this exodus, she claims, are obvious, but some are not: “...because the regime has managed to infiltrate some of these groups of migrants with what they call ‘social movements’, individuals whose objectives are to destabilize these democracies in our region.”

Venezuela expert David Smilde commented on Twitter (@dsmilde): “Brilliant. In a two-minute video aimed at international audiences, MCM manages to feed stereotypes of the Venezuelan opposition as crazy and intolerant, AND raise suspicions that Venezuelan migrants are dangerous.”

Indeed, on behalf of the millions of Venezuelan migrants around the world: thank you Maria Corina!

Guaidó is Funded by Chavismo 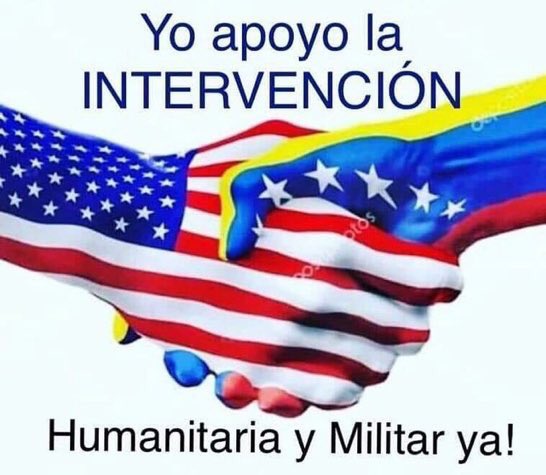 Part of the opposition is convinced that its own leadership is being sponsored by the Maduro regime and is betraying a clear and clean break with chavismo. The theory is linked to a warranted skepticism in Venezuela’s electoral system and with the belief that only a foreign military intervention will trigger a transition from authoritarian rule. Any sign by the opposition leadership of willingness to negotiate a peaceful transition, basically through elections, is considered by this faction of the opposition as a sellout to the regime. Indeed, to simply engage in dialogue with the government is tantamount to collaboration with a criminal narco-regime.

A good example of this conspiracy theorizing is Ángel García Banchs (@garciabanchs), a popular Twitter influencer with 336.1 K followers. García Banchs is convinced that Juan Guaidó, interim president named by the National Assembly, has been unwilling to unequivocally call for a foreign military intervention against the Venezuelan government because he is funded by bolichicos and boliburgueses (corrupt pro-government businessmen and government officials.)

Here is my translation of some recent posts by García Banchs:

“Foreign military intervention will happen even despite @jguaido and all the collaborators with the narco-regime, funded by the bolichicos and boliburgueses who looted PDVSA, CORPOELEC and the Venezuelan nation.”

García Banchs, however, is concerned that some people in the United States may be lobbying against a military intervention in Venezuela. They are doing this because they are financed by the Maduro government:

“How is it that these people are falling from the sky [paracaidistas] and giving talks in Washington? Money from the narco-regime or the bolichicos.”

“If there is funding by the bolichicos and the boliburgueses, the National Assembly and @jguaido are part of the regime. They will never become separated [from the regime].”

“Bolichicos and boligurgueses pay for the very expensive trips and lobbies of those talking about a PSUV-MUD transition. Unfortunately serious Venezuelan industrialists are not funding radicals in Washington [lobbies] to talk about the foreign military rupture/intervention”

“VENEZUELA is in the hands of a lobby struggle. Lobbies payed by bolichicos and boliburgueses to convinced Washington to wait for free presidential elections or for a coup by Padrino [Lopez], which will never happen. In the end, everything leads to a foreign military intervention.”

García Banchs seems aware that a military intervention would be far from a clean affaire and would entail sacrifice and suffering. Today he wrote:

“I won’t lie: the foreign military intervention, of course, will be a war. Those who speak of a surgical intervention are most likely referring to XIX Century surgery, not to XXI Century laparoscopy surgery. It’s either war with freedom or peace with submission under Maduro”

In fact, in the following audio, García Banchs argues that an “inevitable” foreign military intervention will lead to a purifying civil war which will purge Venezuela of chavistas and narcos, but also of populism and socialism. The war will end with a victory of “those in favor freedom, by which I mean liberals,” and will ensue in “the first economic miracle of the Twenty First Century.”