President Maduro apologized to them and said he was unaware that the special bank accounts for retirees only allowed for cash withdrawals and not for transfers, but he promised to change the situations and lamented that perhaps the mistake had been the works of conspirators inside the government: “I sometimes say that the conspiracy is inside [the government]. Could it be that the gringos have paid key government posts so that they do harm in the name of the revolution? But you know [they say] I’m dumb, so I will act when the time comes,” declared the president.

He also again accused US President Obama, and local opposition of being behind the recent crisis, and announced that any bank owner caught sabotaging the system will be arrested.
Publicado por Hugo Pérez Hernáiz en 2:45 AM No comments:

“We have defeated a monetary, political, social, and economic coup, we have contained it,” said President Maduro yesterday.

According to the Agencia Venezolana de Noticias, President Maduro “told that thanks to the government’s actions an imperial plan against the Bolivarian Revolution, with sectors of the national and international right-wing, has been defeated. He also announced that opposition parties Voluntad Popular and Primero Justicia, together with the United States embassy in Caracas, where behind these plans.”

The US Department of the Treasury is also part of the conspiracy, as Maduro says he has evidence (not shown) that the agency plotted to sabotage the timely arrival in the Venezuela of the new higher denomination bills.

Maduro also included US President Obama in the plot of his conspiracy narrative: “This is Obama’s farewell blow (coletazo). He is obsessed with the destruction of Venezuela,” he said.

Fortunately, the monetary coup having been defeated, 2017 will be a year of phenomenal growth for the Venezuelan economy and of complete happiness for the Venezuelan people, according to Maduro.
Publicado por Hugo Pérez Hernáiz en 2:35 AM No comments:

After two days of protests and looting episodes because of cash shortage, President Maduro has decided to allow the 100Bs. bills to continue circulating at least until January 2, 2017.

Venezuela, explained Maduro, “is the victim of a persecution so that the new [higher denomination] bills do not arrive in the country. Today [December 17] we should have had here the new 500Bs., 2,000Bs., and 20,000Bs. bills, but they simply could not arrive because the special planes [carrying them] were sabotaged.”

The Agencia Venezolana de Noticias also explained that “these actions were driven by the international right-wing as part of the economic war that they lead. It is a form of revenge for the measure by the Venezuelan State of taking out the 100Bs. notes in order to neutralize the mafias that act from Cúcuta, Colombia, and extract the bills from Venezuela to damage the economy of the country.”

Despite the chaos of the last two days, President Maduro said the “experiment” of removing the 100Bs. notes form circulation has been a great success, as it has “revealed” to the public the existence of these mafias, which have received a “powerful coup.”

News channel TeleSur further explains the “achievements” of the government’s measures in an infographic: 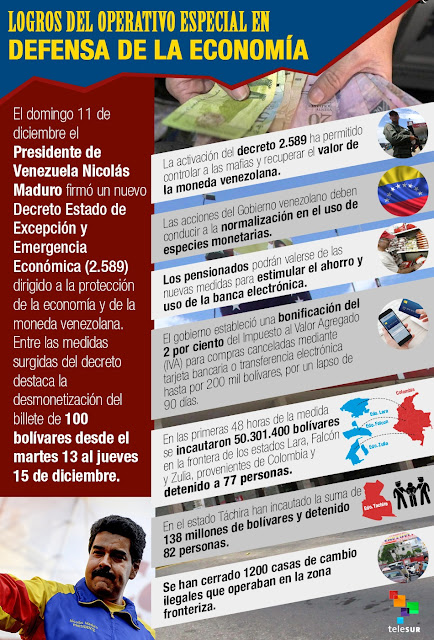 President Maduro ordered on Sunday, December 11, that the 100Bs bill, the highest denomination bill in Venezuela, be taken out of circulation within 72 hours. The reason behind the measure is a complicated conspiracy theory which involves the US Department of Treasury, the Colombian government, “Money Mafias” operating in the Colombia-Venezuelan border, unnamed NGOs, and the local opposition.

Here are some of the explanations of this conspiracy as given by government officials and the State media apparatus.

The Popular Power Minister for Interior Relations, Justice and Peace, Mayor General Néstor Reverol Torres, has been put by President Maduro in charge of the “money exchange” operation involving the 100bs bills. He explained that the US Department of Treasury has hired local NGOs to “extract” Venezuelan money in order to destabilize its economy.

Reverol quotes from research which, according to him, shows that “huge amounts of cash” has been taken out from the country with the aim of “draining all the circulating money and suffocating the national financial system.” The local NGOs (funded by the Treasury Department) hire local criminal gangs that take out the 100Bs bills through Colombia. These bills end up in storage facilities in Europe. Switzerland, Poland, Ukraine, Spain, Germany, and the Czech Republic are some of the countries in which, according to Reverol, these money stockpiles have been detected.

The Minister also explained that this same conspiracy has been active before against countries such as Libya and Iraq, “in order to bring down their governments through a non-conventional war. The [the conspirators] call it the Redemption Operation.” News outlet Telesur backs this claim by entitling their report in English on the issue “Currency War in Venezuela Also Used Against Iraq and Libya.”

The conspirators seem willing to take on huge losses in order to destabilize the Venezuelan economy. Reverol said that there is an agreement between the local NGOs and the conspirators that, once the Venezuelan government is toppled, “for every 100Bs bill they [the NGOs] take out, they [the conspirators] give them [between] 80 dollars cents to 1,30$.” Individual citizens get payed less, according to Reverol, “for each 100Bs. bill they take to Colombia, they are deposited in their accounts 120Bs. This is also part of the destabilization plan.”

The conspirators however are able to cut losses by turning the 100bs bills into counterfeit dollar bills. This is possible, according to the government, because of the high quality and durability of Venezuela’s paper money.

The chief of the pro-government block in the National Assembly, PSUV deputy, Hector Rodríguez, has congratulated the President for the measure and claimed that already today (December 12) “we are witnessing the fall of the big mafias.” He also said that “the people have complete knowledge of how these cash mafias operate and how they affect the economy, and of the need to take measures in order to defend the people against sectors of the right who are waging this economic war.”

President Maduro also announced that the Venezuelan-Colombian border will remain closed for the next 72 hours (since December 12), in order to avoid what he said are the “repatriation” of cash attempts by the mafias. “These mafias have all gone like crazy. Just this morning, in the early hours, we captured 64 million bolivars coming into the country by back roads; this is why I have decided to again close the frontier with Colombia for 72 hours.”

Colombia plays and important part in this cash conspiracy, according to Venezuelan officials and State media. A press release issued yesterday by the Venezuelan Foreign Ministry asking the Colombian government to derogate its “Resolution 8”, which according to the Venezuelan government allows for the operation of money exchange houses on the Colombian side of the border and the existence of a “double exchange system” in Colombia.

Here are the infographics published by the Interior Ministry explaining this “Attack against the Venezuelan financial system.” 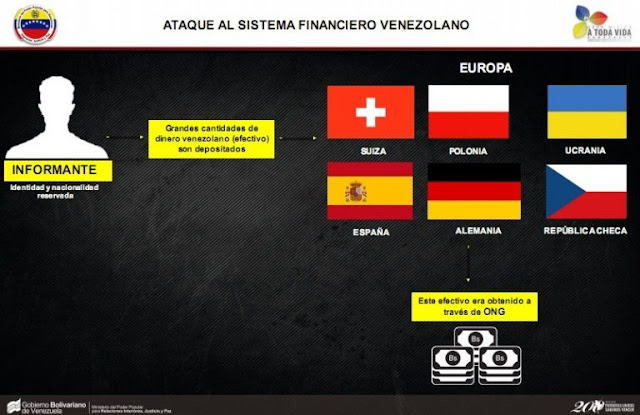 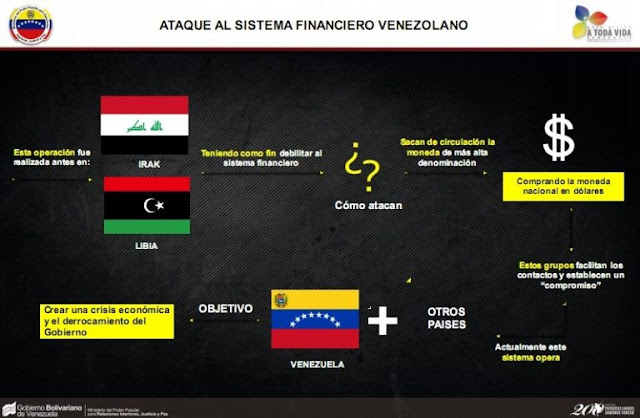 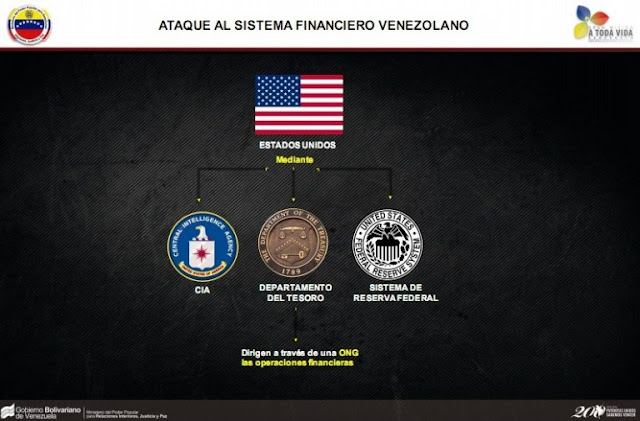 Yesterday Venezuelans had difficulty withdrawing cash form ATM machines and buying good using credit and debit cards, as most of the system was off-line during the day.

President Maduro claimed that the failure was part of an “attack against the commercial exchange technical platform (…) inscribed in the financial war against Venezuela.”

Maduro said that he has ordered the deployment of a police SEBIN commission to investigate the technical failure. However he is sure this event is part of a wider conspiracy against the Venezuelan economy.

The plot, according to the government, also includes the recent collapse of the local currency in the black market. Economists argue that the drop in the value of the Bolívar against the Dollar (close to 200% in a week) is related to the steep increase in money supply in the last months. But government officials prefer to blame for the collapse the web portal dolartoday, which is the most widely used source for tracking the value of the Bolívar.

The Vice-president of the ruling PSUV and National Assembly deputy, Diosdado Cabello, told the audience of his show on public television: “If you woke up poorer this morning, it is because of dolartoday.” President Maduro has gone further in stablishing the conspiracy links between the web portal and the opposition and has called the opposition coalition MUD, MUDtoday.
“They are rubbing their hands and preparing an ambush against the country, but you can’t see them [no aparecen], they stab you in the back and hide,” said Maduro about the conspirators.
Publicado por Hugo Pérez Hernáiz en 7:20 AM No comments: