After a 20 days delay the Banco Central de Venezuela (BCV) has finally reported the inflation index for November (4.8%), and a prediction for December (2.2%).

The numbers are far from President Maduro’s prediction of a deflation of 5%, but the BCV did feel compelled to explain in its report that the “economic dynamics” of the last months have been influenced by a “economic war and a government’s counteroffensive.”

This is the BCV version of the economic war theory as expressed in the first three paragraphs of its report:

Dynamics of price formation in the political and economic juncture of 2013: economic war and government’s counter offensive.

During 2012 the economic situation was characterized by high growth, moderate inflation, and low scarcity levels, which allowed for the celebration of the presidential elections in a stable juncture. However in October 2012 some of the central variables of the Venezuelan economy began to suffer alterations: one of the most noticeable of these alterations was the irrational rise in prices and the speculative extra-official value of the dollar, which lead to a series of consequences for the national economy during the year 2013.

The most serious of these alterations, noticeable since the last quarter of 2012, were registered by price and scarcity indicators, which remained during 2013 at unusually [high] levels. The sickness and passing of our leader, Comandante Hugo Rafael Chávez Frías, was taken advantage of by certain sectors of the political opposition and some business owners in order to artificially affect the deterioration of some economic variables.

As has become usual in Venezuela’s history, political tensions and economic destabilization were combined in the form of an authentic economic war against the Venezuelan people, with significant impacts in the prices of the main good and services of most consumption.

The report goes on to explain the “relation” between moments of political tension in recent Venezuelan history and how those moments have “been used” to wage an economic war against the country. It also praises President Maduro for the “extraordinary” measures he took during November 2013 against speculation and argues, without explaining the methodology behind this assertion, that inflation would have reached 6% in November, instead of 4.8%, if it were not for the “economic counter offensive” of the Venezuelan government.
Publicado por Hugo Pérez Hernáiz en 4:59 AM No comments:

Maduro: In 2013 Venezuela defeated a conspiracy


Yesterday’s promotion ceremony of military officers at Fuerte Tiuna included the promotion of the President of the National Assembly Diosdado Cabello to the rank of Captain, among others, for their participations in the military coups of February 4 and November 27, 1992 (called “civic-military rebellions” in the official government jargon.)

According to AVN, Maduro congratulated the promoted officers and declared: “2013 was the year that unity and revolutionary morality defeated the attempts by the North American Empire and its allies of the Venezuelan right to divide the National Bolivarian Armed Forces and destabilize the country.”

He added that his offensive against the “economic war” will continue into 2014, but will now include a “new and more powerful civic-military offensive.” 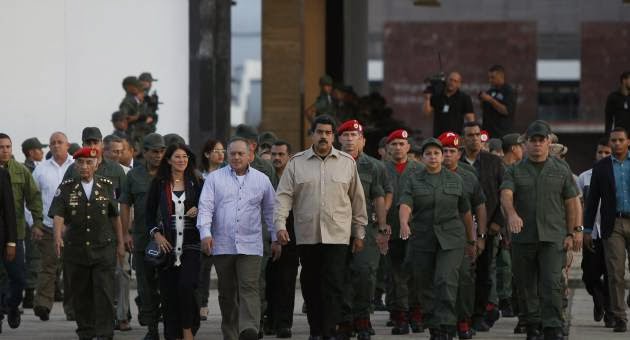 Image of the "Civic-military Hight Command of the Revolution" taken from the web page of the Agencia Bolivariana de Noticias
Publicado por Hugo Pérez Hernáiz en 6:13 AM No comments:

New arrest related to magnicidio plot made in Colombia


In August this year Interior and Justice Minister Rodriguez Torres announced that two Colombian nationals had been arrested near Caracas. According to Rodriguez Torres the two were the last link of an elaborate plot by the Venezuelan “right”, Venezuelan exiles in Miami, Colombian ex-President Uribe Vélez, and Roger Noriega, to assassinate Nicolas Maduro and Diosdado Cabello. Rodriguez Torres informed that the arrest had been made with the collaboration of Colombian police services and that more detentions would be made in Colombian territory.

This last week a new arrest related to the case was in fact made in Colombia. Alejandro “Scooby” Salcedo was detained in Antioquia charged with being the accomplice of the two men arrested in Venezuela in August. However, according to the chief of Bogota´s Metropolitan Police, Édgar Sánchez, Slacedo has confessed that group planned to travel to Venezuela in order to steal from a wealthy unidentified family of money lenders, and not to commit “magnicidio” against Maduro or Cabello as the Venezuelan authorities have repeatedly claimed.
Publicado por Hugo Pérez Hernáiz en 8:24 AM No comments:

Economic War will continue in 2014


President Maduro declared yesterday that next year he will “dismantle” the economic war that, according to Venezuela´s public media, “sectors of the right are waging against the Venezuelan People.”

“2014 will be the year we dismantle at its roots all this economic attack against the country. (…) We must continue balancing our economy against the speculative attacks and prepare for a good 2014 of work and growth,” said Maduro.
Publicado por Hugo Pérez Hernáiz en 5:42 AM No comments:

Email ThisBlogThis!Share to TwitterShare to FacebookShare to Pinterest
Etiquetas: Economic War, The Right


According to President Maduro the power outage that affected most of Venezuela in early December was a sabotage act by the opposition.

Yesterday, during the ceremonies commemorating the 183 anniversary of the death of Bolívar, Maduro declared that “days before the [December 8] elections [the opposition] took down a transmission line. It has all been proven. With a single shot they blow up a key line and left the country without electricity.”
According to El Universal, Justice and Interior Minister Miguel Rodríguez had already last week proposed  the idea that a sniper could be behind the blackout: “I have been thinking on hypothesis: a single shot. A shot fired from 50 meters away by a good sniper, at a cable that is 3 centimeters thick, it’s very easy. It was a clean cut.”
Publicado por Hugo Pérez Hernáiz en 4:19 AM No comments: