Things are getting pretty weird, at least according to some opposition supporters. This is being often retwitted: 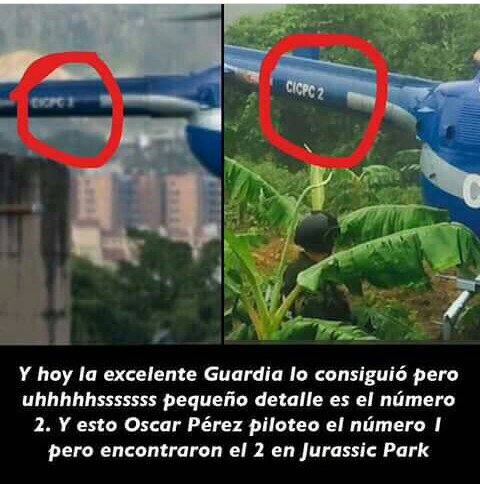 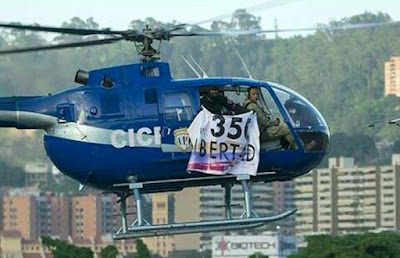 (Updated June 29. Thanks Gabriel Andrade and Trina Coleron for your comments.)

What we know so far of yesterday’s confusing incident is that a group of agents of the CICPC (intelligence police) flew a police helicopter over the buildings of the Venezuela’s Supreme Justice Tribunal and Interior Minister. Several shots were fired at the buildings from the helicopter and at least one grenade was thrown. No injuries were reported.

The helicopter had been commandeered by Oscar Pérez and a group of at least four more officers. Pérez published a video explaining that his aim was to “return power to the democratic people.”

The government is also being accused of conspiracy. Some opposition supporters expressed via social networks their suspicions that the actions could have been staged by the government as an excuse for further militarization and repression. Francisco Toro of Caracas Chronicles hypothesized that the event could be a “false flag” by the government: “(Oscar Perez’s) video looks like a two-bit parody of what an underpaid TeleSUR intern thinks the opposition looks and sounds like,” wrote Toro. However he concluded that he leans more to Pérez being a “random lunatic”.

The government however was quick to alert of an unfolding coup attempt. On early evening, president Maduro said on television that the event had been a “terrorist attack” and that the armed forces would be deployed in full to stop the coup.

The Ministry of Information issued a statement saying that the event was part of “an escalation of a coup against the Constitution of the Bolivarian Republic of Venezuela and its institutions.” Oscar Pérez, says in the statement, “is under investigation for his links with the CIA and the United States Embassy in Caracas, and for his links with an ex-minister of Interior (of Venezuela), who has recently publically confirmed his contacts with the CIA.”

The “ex-minister of Interior” mentioned is Miguel Rodríguez Torres, who said in a news conference that he in fact had had contacts with the CIA as Chavez’s Interior Minister and under his orders. “When I was the director of the intelligence services, president Chávez told me that we should have the best relations with all the other intelligence services of the world, including the CIA,” said Rodríguez Torres.

Here is the transcription made by Telesur of the statement read by Information Minister Ernesto Villegas yesterday (the statement has not yet been published in the MINCI web page):

Deaths during manifestations could be part of a conspiracy

When asked by the BBC correspondent in Caracas, Daniel García (@danigmarco), about the case of Fabian Urbina, fatally shot by a National Guard during protests in Caracas in July 19, Maduro said that in any such cases the agents responsible for the shootings have been detained by authorities, “the second such incidents happen.”

But also, Maduro added, “I have ordered an investigation to find out if there is a conspiracy [behind those cases], so that the People may know. I can’t be fooled compadre, nobody can think that if I have clearly given orders not to use firearms, and if there are the contention mechanisms in place of gas and pellet guns, somebody could take a picture of himself holding a firearm. Don’t you think that’s strange?” asked Maduro.

“Photographers, photographers everywhere. How many photographers do you find in an opposition protests? Sometimes more than the protesters themselves. So I have ordered an investigation, because there is too much money behind all this compadre, to many dollars,” explained the president.

Sabotage, Not Socialism, is the Problem

Incompetence, corruption, and authoritarianism are not even a small part of the problem…

Questions by the opposition about the mental health of president Chávez were common before his death. His successor Nicolás Maduro has also been “psychologically diagnosed” by critics. Venezuelan government agencies and officials are increasingly also using a rhetoric taken from the field of psychology with political intent: opposition to the government, or even “critical chavismo”, is regularly now labeled in government media as a mental disorder. Opposition discourse is also analyzed as part of a “psychological war” aimed at the Venezuelan people.

The trend was originally set by PSUV leader Jorge Rodríguez, a psychiatrist and mayor of the Libertador Municipality of Caracas. Rodriguez has hosted a public television show called Politica desde el Divan since 2015 (watch the first episode here.) According to its web page description, in the show “political subjectivities, discourses, classical tensions, and the forces that produce the social scene are analyzed, arguing that politics, no matter its nature, is constituted by measurable and scientifically verifiable (facts).” In practice, Rodríguez regularly analyses opposition figures and questions their mental sanity. He explains the opposition discourse as a whole as a part of a “psychological war” waged by the Empire and its local allies against the Bolivarian revolution.

Psychological diagnoses have also been waged against internal government critics. Most recently PSUV leader and National Assembly deputy Pedro Carreño formally asked the Supreme Justice Tribunal to name a medical board to evaluate the mental health of Attorney General Luisa Ortega Díaz, who has criticized the Constitutive Assembly called by president Maduro. “The attorney is showing signs of mental insanity, and her appointment should therefore be revised,” diagnosed Carreño.

In order to better draw from the tools of psychology to understand the current crisis, the Venezuelan government sponsored the “First International Forum on Psychology, Violence, and Psychological Operations,” from 12 to 24 June in Caracas.

Information Minister Ernesto Villegas was the keynote speaker for the inauguration of the event. He encouraged the 11 international psychologists participating in the forum to discuss the “manipulation of information mechanisms used in the spiral of fascist violence now lived by the country. (…) Do not leave outside the range of your radar the extent and severity of the fascist phenomenon in the country,” asked Villegas in his speech.

During the academic sessions, according to government media, international experts devoted most of their attention to the analysis of the “main psychological operations used by the right-wing against the revolution in Venezuela.” For example, research by Argentinian psychologist Mario Colussi has led him to conclude that “under a systematic and progressive attack scheme, a plan of economic strangling, that has also created the conditions for a psychological war, has been stablished in Venezuela.”

The Venezuelan psychologist Fernando Giuliani, also a participant in the forum, pointed out that “the right-wing is trying to create stereotypes and prejudices in order to diminish critical capacity (capacidad reflexiva) of the populace, so that the populace itself will generate the conditions for the overthrow (of the government).”

The idea that the enemies of the revolution are waging a “psychological war” has also been argued by pro-government pollster Hynterlaces since 2015. In its reports Hynterlaces has regularly accused the opposition of “inducing neurotic responses” in the Venezuelan people (In this blog here, here, and here.) 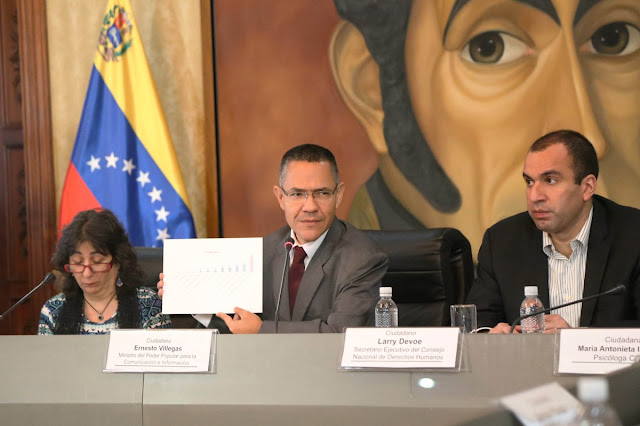 President Maduro is launching a preemptive conspiracy theory against what he says is a future plot against the Constituent Assembly he is convening. He is calling for “civic-military union” against this plot.

“If one of these days Venezuela wakes up to news of a conspiracy, of a plot, to stop the popular constituent process, which has been constitutionally set for July 30, I call upon the civic military union to defeat, on the streets, the conspiracy, the plot, the coup d’état, that could be staged against the call for a Constitutive (Assembly),” the President said yesterday.

Apparently referring to the Attorney General, Luisa Ortega Díaz, who has filed a petition to the Supreme Court of Justice to halt the Constitutive Assembly process, Maduro warned against “traitors and treasons.”
Publicado por Hugo Pérez Hernáiz en 3:16 AM No comments: