President Maduro has told the Bolivarian Armed Forces, he will create a special plan against what he called the “the sabotage of the national electric system.”

“From today on I will be working on this plan,” said Maduro. Latter in the same speech he clarified that he himself would not be designing the plan, instead he asked the Armed Forces to present him with “a special plan against the sabotage and the war against the electric system, because right-wingers want to boycott the elections [presidential elections, April 22], and they have a plan to attack the whole [electric] service.”

Electricity blackouts have left many areas of the country in the dark for hours in several occasions in in recent years. The most recent, on February 22, left 11 states without power for more than 11 hours.
Publicado por Hugo Pérez Hernáiz en 6:22 AM No comments:

González López declared that these two “terrorists” are “allies” of VP leader Freddy Guevara, who has taken refuge in Chile’s embassy in Caracas since November 2017. VP is the party of the opposition leader Leopoldo López, currently in house arrest.

At one point in his declarations González López claimed that the two “terrorists” wanted to kidnap Nelson Merentes and ransom him for money to finance VP, later he says that their real objective was to kill Merentes as part of “selective assassinations” plan which would include other government officials. González López showed a video, also posted on his Twitter account (@GJGonzalezLopez), of the interrogation of one of the detainees, Luis Alberto Navas, in which he says that Freddy Guevara was the mastermind behind the plan.

On Thursday, president Maduro declared that security services had discovered the plan. “We have recordings, videos, testimonies, and confessions from [militants] of the terrorist party VP, they were preparing the kidnaping and the attack,” said the president.

The Agencia Venezolana de Noticias claims that the supposed plan to kidnap, or assassinate, Merentes is part of “selective killings” of chavista leaders by an opposition that “has constantly used terror as a political strategy, as they did in April 2002, when 19 Venezuelans were killed and dozens wounded, with the aim of generating a constitutional breach and justifying a coup d’état.” 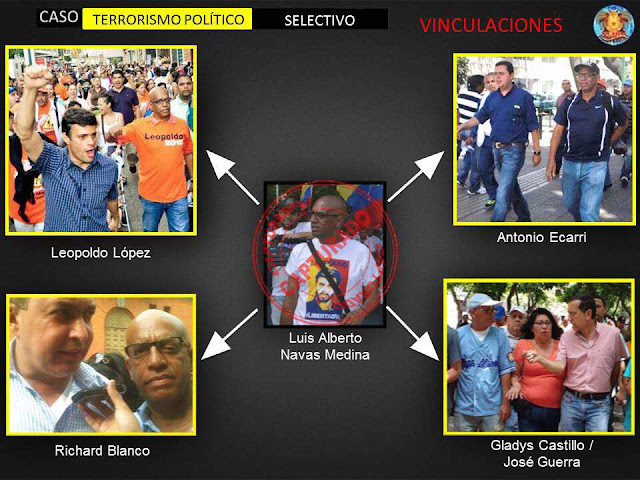