Supposed evidence of a conspiracy to topple the Venezuelan government was revealed today in a press conference by the Political High Command of the Revolution, led by Libertador Mayor Jorge Rodríguez.

Rodríguez showed what he claims are a series of e-mails sent by opposition leader Maria Corina Machado to a constitutional lawyer Gustavo Tarre and that were intercepted by the government.

The e-mails reveal, according to Rodríguez, the existence of “a group devoted to the end of peace and linked to an attempt of magnicido [to kill the head of state]. For this purpose they have gathered funds: to assassinate Nicolás Maduro. At the same time they are carrying out a coup d’état, which fortunately has been deactivated.”

Besides Maduro, the plot would also include the assassination of several other government officials: Diosdado Cabello, Tareck el Aissami and Miguel Rodríguez Torres.

Here is a video link by Últimas Noticias of part of the press conference. 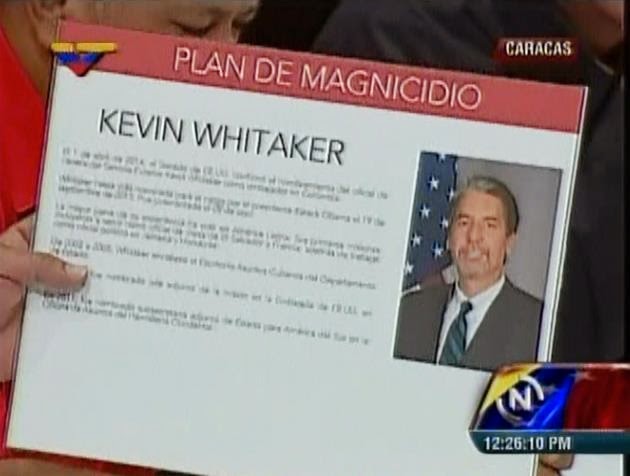 Maduro: Scientific evidence of conspiracy to be shown soon


Yesterday President Maduro again announced that he will soon reveal the evidence of a plan to use local military to “generate chaos in the country.”

“I will show a scientific investigation, (…) that shows how some politicians are constantly plotting a coup d’état [reincidentes en golpe de Estado], even some who are deputies of the National Assembly, and some business people linked to Miami too. [They] are plotting to try to buy members of the Armed Forces. (…) They are preparing to attack the institutions of the Fatherland in order to generate a general chaos in the country. (…) Justice will be made with this malevolent plan. Enough of imperialist coups! Enough!” Maduro declared.
Publicado por Hugo Pérez Hernáiz en 12:06 PM No comments:


President Nicolás Maduro announced today that soon he will finally show of a coup d’état he claims was attempted against his government by “business people and politicians [politiqueros] of the right.”

“In the next few days I will speak out about some of the issues that are ready, about how the bourgeoisie planned to directly grab power [dar un zarpazo] in the past days, during the guarimbas [barricades],” said Maduro.

He also explained why the evidence, despite several announcements by government officials, has not yet been shown: “We have remained silent [calladitos] because we want to be on a sure footing. Venezuela, be ready! I will show proofs, testimonies, and I will show them directly to the Venezuelan people.”
Publicado por Hugo Pérez Hernáiz en 3:22 PM No comments:


According to the President of the National Assembly, Diosdado Cabello, Venezuela is not really dealing with an economic crisis generated by misguided policies, but with “economic difficulties that are not internal [no son propias], they are generated, are totally exogenous. We must all be conscious about this, we must tell the people.”

For Cabello, the opposition is trying to generate a “public opinion matrix” which presents socialism as a failed model.


Venezuelan government officials and public media have recently announced that the “on-going coup d’état,” they claim has been attempted since February this year, has been finally defeated. In the official rhetoric this should be understood to mean that the guarimba [barricades] street protests of the last months are decreasing.

President Maduro however announced yesterday that this is not necessarily the case, and that the “on-going” character of the coup should be understood to mean that it is truly constant and continuous.

According to Maduro opposition leaders have recently met to plan the “collapse” of the country by the month of June. He says he had access to information about this meeting through “internal informants” he has inside the opposition ranks.

He also insisted on the claims previously made by Interior Minister Miguel Rodríguez Torres that drug use is driving the street protests: “Some perverse coup mongers and guarimberos have been hiring criminal bands, and they are paying them with drugs and other means so that they can act violently and go out and kill. In some cases they are well known political and television figures. They want to drive the country into chaos. I denounce it. We have been constantly denouncing it.”

Maduro also said that he had ordered Rodriguez Torres to show the evidence of the government’s claims, because “there can be no softness or impunity with these coup mongers, these guarimberos, no matter what their last names are, no matter what their position is. Whoever is against the Constitution and the peace of the country will have to face justice. No one can blackmail me. No power will force me to give in [torcer el brazo].”
Publicado por Hugo Pérez Hernáiz en 2:27 AM No comments: