News according to public media

Here is a selection of “infographics” produced by Venezuelan news outlet Telesur this week and posted in social networks. 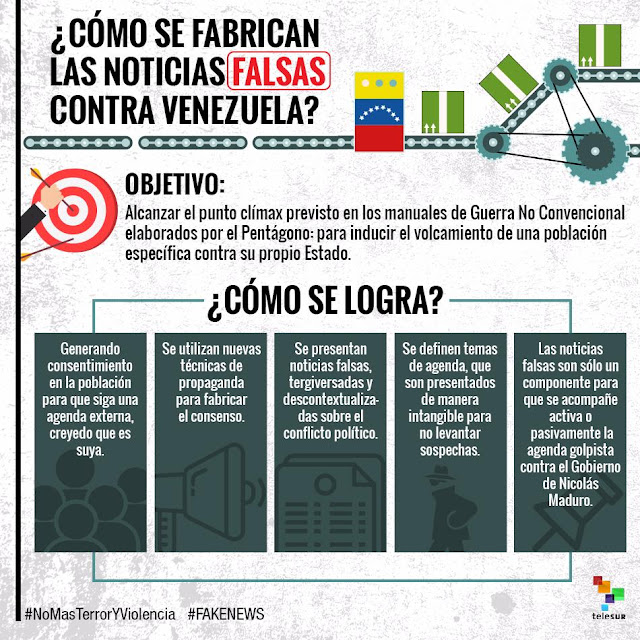 Comparisons of the Venezuelan case with Chile’s 1973 coup have been part of the official rhetoric for a long time. Here is Telesur’s version. It includes the opposition funded by the US, economic attacks, and a “psychological warfare” by the media. 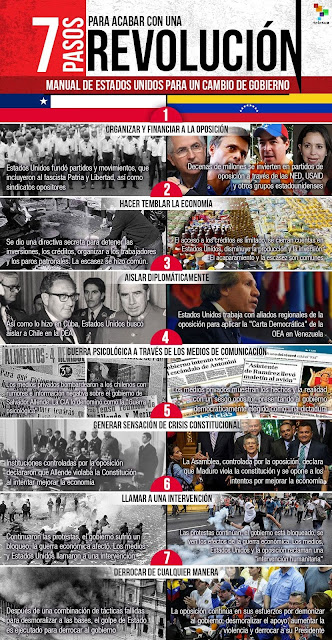 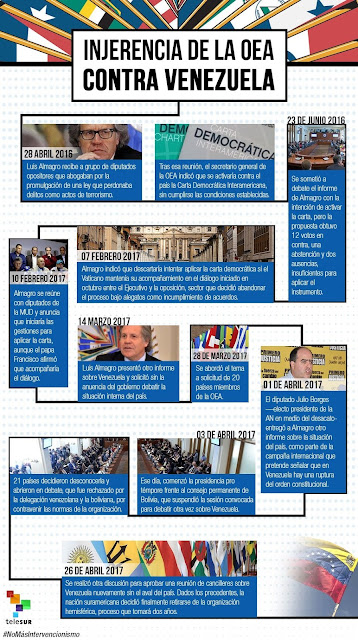 Minister of Foreign Relations, Delcy Rodríguez, met yesterday the international press correspondents in Venezuela to tell them that “media corporations have a historic responsibility in the configuration of facts that have justified interventions, such as in Iraq, Libya, and Syria, and this is also a manual they are trying to impose in Venezuela.”

“All imperial wars, in the history of humanity, have always been preceded by media campaigns validating their actions,” further explained Rodríguez. She also asked the international press to verify their sources and to truthfully inform what is happening in Venezuela.

The prime example of this international media disinformation campaign against Venezuela, presented by Rodríguez and the government’s media apparatus, is the death of the young opposition protester Juan Pernalete on April 26.

Witnesses and media have alleged that Pernalete died of wounds caused by a teargas bomb directly fired at close range to his chest by the security forces.
Rodríguez says however, that “the elements shown today totally undermine that version and this is why we are calling for news to be presented in the most objective way possible.”

Those elements undermining the media version were presented by Communication and Information Minister, Ernesto Villegas. He showed a video taken during the confusing seconds after Pernalete went down and other protestors were carrying him away.

Villegas explained that this video is part of “a police approximation that shows with a high degree of certainty the possibility that this young man was murdered with a weapon called captive bolt gun [pistola de perno], a type of gun used in livestock farming, to finish off cattle, and we have found elements of criminalistics and news worthy interest that point to this direction.”

The video shown by Villegas had been originally posted by pro-opposition newspaper El Nacional. The Information Minister however invited the international press to more closely watch the video for “criminalistics elements.”

For example, said the Minister, one of the protestors in the video screams “Was he hit?” to which the answer from another from a second is “No!” A close up of the moment two protestors are aiding Pernalete out of the protest line seems to show, according to Villegas, one of them pulling his hand from out under Pernalete’s t-shirt. This is a “suspicious attitude” which has led police investigators to conclude that the captive bolt gun could have been used to kill Pernalete.

“It’s all part of a strategy of a construction of false positives. The similarities in the construction of facts that do not exist and that justify violations of international rights, this is our concern,” concluded Delcy Rodríguez.
Publicado por Hugo Pérez Hernáiz en 3:20 AM No comments:

Easter week has been a triumph for peace, according to President Nicolas Maduro.

Maduro showed videos last night of what he said are detained opposition militants confessing to being paid by opposition party Primero Justicia to commit “terrorist acts.” Maduro called the videos “testimonials” and said that he has been authorized to show the “confessions” on television by the “Citizens Power and the Judicial Power.”

Maduro also said that such videos, the product of an “impeccable criminal investigation,” are irrefutable evidence that the opposition is engaged in terrorists and destabilizing activities.

“Here are the testimonies, the proofs, and we are about to capture those directly responsible for all this destruction in the country. We are following several investigation lines. I want to congratulate the officers of the CICPC (criminal investigations police) and the SEBIN (political police), the Interior, Peace, and Justice Minister, prosecution authorities all over the country, and the Judicial Power for this meticulous work done according to our laws,” commended Maduro.

The Secretary General of the Primero Justicia party, Tomás Guanipa, claimed that members of his party detained during this last week’s opposition protests had been “physically and psychologically tortured” and forced to confess to participating in acts of terrorism. Guanipa, and other opposition deputies, were mentioned in the confessions as the “master minds” of the plot.
Publicado por Hugo Pérez Hernáiz en 5:35 AM No comments:

General Rodríguez Torres was Maduro’s Popular Power Minister of Interior Relations, Peace and Justice, from 2013 to October 2014. He was part of Chavez’s 1992 failed coup, but is best known for being the public face of Maduro´s government during the 2014 opposition protests.

In 2013 a group a Venezuelan human rights organizations published a press release expressing concern for Rodriguez Torres’ public claim that the president of the NGO Control Ciudadano, Rocío San Miguel, was a CIA agent. Rodríguez Torres never provided evidence of his claim.
During the violent first months of 2014, Rodríguez Torres often gave news conferences claiming that the opposition protests were no more than part of a plot to overthought Maduro’s government. The conspiracy was, according to Rodríguez Torres, led by the Department of State of the United States, and also included Colombian ex-president Álvaro Uribe Vélez, and a long list of opposition leaders. Short of evidence to back his conspiracy claims, Rodríguez Torres often illustrated his press conferences with screen graphics linking pictures of opposition leaders and their foreign puppet masters.

But since January 2015, after his dismissal as Interior Minister, Rodríguez Torres has become increasingly critical of the government, making statements about the government’s food program CLAP, for example, and claiming that “Venezuela needs a spiritual revival.”

Now, according to the Venezuelan news portal El Estímulo, the military intelligence agency DIGCIM could be about to accuse Rodríguez Torres of being part of a conspiracy to oust Maduro. El Estímulo claims that the General will be presented as the head of a “great military conspiracy movement” operating in Venezuela.

This comes a day after PSUV leader Diosdado Cabello announced on his TV Show Con el Mazo Dando, that the government has discovered an ongoing conspiracy which the international reaction to the coup against the National Assembly, and street opposition protests in Venezuela. Cabello implicated opposition party COPEI leader Roberto Enríquez among other opposition leaders in the plan, but said that unnamed “members of the armed forces” are also part of the plot.

“Don’t be surprise if we come knocking your door, tun, tun, tun… we are working for peace,” said Cabello referring of possible night raids to come.
Publicado por Hugo Pérez Hernáiz en 6:50 AM No comments:

Kamikaze dogs and radiation weapons: A Jesuit priest reveals how Chávez was murdered

Venezuelan Government officials, top chavista conspiracy theorist, pro-government journalists and intellectuals, have often claimed that president Chávez was assassinated by his enemies. The theories usually argue that Chávez’s cancer was “inoculated”, that is, he was somehow poisoned using a secret weapon developed by imperial intelligence services.

Now the pro-government Jesuit priest Numa Molina says he has interviewed the former Italian intelligence agent and author of a book Ennegrecido con rabia, Mary Pace (Internet searches of the name and the book title only provide links to Molina’s own article.)

According to Molina, Pace claims Chávez was the victim of two CIA plotted assassination attempts, the second of which, involving a “radiation weapon” developed by the agency since 1948, was probably successful in inoculating Chávez with a fatal cancer.

But it is the first, unsuccessful plot, which is interesting because it has not been mentioned in any of the previous theories about Chavez´s death. The plan involved the use of CIA trained, explosives loaded, “kamikaze dogs” to attack Chávez in a public space. The plot reached an advanced stage but was fortunately discovered and revealed to the Venezuelan embassy in Italy by Pace herself. The CIA was forced to dismantle the whole operation.

Molina finishes his report of the interview: “I believe that Mary Pace’s contributions continue to be very valuable for this and future research on the subject. Her last book and our personal meeting produced so much interesting data. I finish this by saying that for me this was one of those journalism adventures in which I felt the struggle for justice and peace becoming the force that gives strength to research, regardless of the media impact of the news.”

Note: In his novel El Otoño del Patriarca, Gabriel García Márquez tells of a very similar plot. Dogs are trained to attack the wife and the son of the dictator in a public market. No explosives in this plot, the dogs trained to attack and devour their victims.

(Thanks to Luis Gómez Calcaño for the link to Molina’s article.)