Luisa Ortega Díaz is convinced that there is a magnicidio plot

Today, Attorney General Luisa Ortega Díaz told reporter José Vicente Rangel in an interview that she has no doubt that there is a plot (conjura) to kill President Maduro.

“Undoubtedly there is a national and international plot against the Venezuelan State, the plot includes the assassination of the President of the Republic, a magnicidio, and attacks against [government] institutions. (…) We are investigating and we still have not reached the bottom of this problem because it is much more serious than revealed by the [initial] investigations, but we will continue investigating and taking measures,” said Ortega Díaz.

She linked the alleged plot against the government with the street protests of the last months, calling them “terrorist acts executed by ultra-rightist groups.”

Ortega Díaz also called on the central government to strengthen its “media defenses.” “This has to be a State policy,” she remarked, “because the [media] attack against Venezuela has been fierce.”
Publicado por Hugo Pérez Hernáiz en 2:27 PM No comments:

Government silent on Magnicidios and Coups

The 193rd anniversary of the Batalla de Carabobo was commemorated with the usual patriotic and militaristic discourses common in these events.

Maduro and other orators insisted on the need for “unity and loyalty” in the face of internal and external threads. The emphasis however was on the “internal” front, as the government has been receiving strong criticisms from its own left flank.

But the most notable issue, at least from this blog’s perspective, was the absence from the government’s rhetoric yesterday of any claims of supposed plots to kill the President or of an on-going coup d’état. In fact the official media has been almost completely silent for some days on the issue.

Instead, the current leading discourse this week seems to be this: The Empire is using “dissolving tactics” against the Revolution by “inoculating” internal divisions. Ranks are to remain united and trust their leader with “maximum loyalty” in the face of these threats.
Publicado por Hugo Pérez Hernáiz en 8:37 AM No comments:

Announcing the unanimous decision by the jury of the journalism award, Rosa Caldera, of the Movimiento, stated that the decision was based on the fact that: “on a daily basis he [Rodríguez Torres] has provided Venezuela with information through which the truth has been revealed. We believe that he has [successfully] refuted the versions of Venezuela as being in total chaos. (…) Rodríguez Torres has also been able to unmask national and foreign coup leaders who have conspired against the peace of the country. He has therefore neutralized a coup d’état against President Nicolás Maduro.”

Maduro returns from Bolivia and pledges strong action against conspirators

After denouncing in the G77 meeting in Bolivia that there is an Imperial conspiracy to overthrow him and “take over Venezuela’s resources,” president Maduro has returned to Venezuela to continue revealing what he claims is an opposition plot against him.

“There will be justice on coup mongers, guarimberos, and magnicidas [assassins of head of State], it doesn’t matter who they are, whatever office they hold, they will pay for their crimes, all the extreme right. We will keep on denouncing them permanently,” declared Maduro yesterday in his weekly radio program En Contacto con Maduro.

Arrest warrants have been issued for three of the alleged plotters of the magnicidio conspiracy: Pedro Burelli, Ricardo Koesling, and Diego Arria. The three are out of the country.

Another alleged main plotter, Maria Corina Machado, was cited yesterday to the General Attorney’s office as a witness to the case. According to Machado, she was questioned for more than 7 hours but never formally accused of being part of the plot. In fact she was told that since she is not under formal investigation, and is only a witness, she could not have access her file and her lawyers were not allowed to be present during the interview.

Machado has been publically accused by president Maduro of being an “assassin” and one of the master minds of the supposed plot to kill him.
Publicado por Hugo Pérez Hernáiz en 5:23 AM No comments:

Public media is now devoting most of its attention to elaborate on a supposed plot to assassinate president Nicolas Maduro and stage a coup d’état against the government.

Rodriguez made public what he claims are voice messages sent by one of the plotters, Pedro Burelli, to an undisclosed Armed Forces official. In the recordings the voice argues that the only missing piece of the plot is for a part of the army to “make the decisions it needs to make,” in order to “clean the scum of chavismo.”

Attorney General Luisa Ortega Díaz has issued arrest warrants for Pedro Burelli, Ricardo Koesling and Diego Arria. The three are out of the country and Ortega Díaz says her office has petitioned Interpol to arrest them. Machado has been cited to the Attorney’s office as a witness on 16 June. She has declared she will attend. 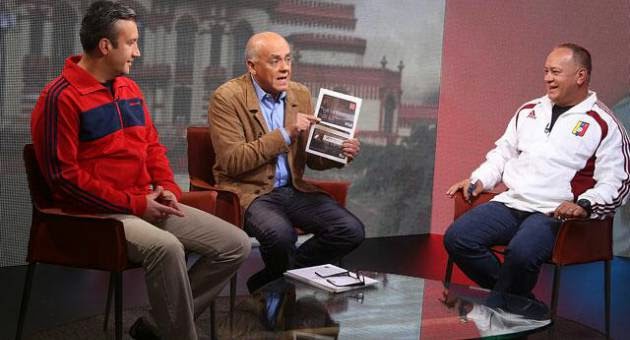 Experts advise the government against coups and magnicidio


Several “experts” met yesterday the Political High Command of the Revolution to, according to the Agencia Venezolana de Noticias, talk about “the evidence of a recent plan of magnicidio [assassination of Maduro], and continued coup d’état that involves leaders of the right, among them Diego Arria, Maria Machado, and Henrique Salas Romer.”

After the meeting, Óscar Shemel, president of the pro-government polling agency Hinterlaces, said that “the evidence of a magnicidio plan, immersed in a much broader plan of destabilization and neurotization of society, are convincing [contundente].”

Constitutional lawyer Hermann Escarra claimed that there is “evidence of electronic character [e-mails] that prove that there are sectors that are interested in advancing violence, (…) even in attempting against the integrity of the Chief of State.”
Publicado por Hugo Pérez Hernáiz en 10:42 AM No comments:


According to Interior, Justice and Peace Minister Miguel Rodriguez Torres, the magnicidio attempt against Nicolas Maduro was first planned by the “Venezuelan ultra-right” as early as 2010.

Rodríguez Torres told Globovision that the assassination of the president “was planned since 2010 in México, during a meeting of youth and student leaders. (…) The plan was not only to kill the president, but also to plunge the country into a crisis, total chaos. They wanted to destroy the hopes of the millions that voted for Maduro. (…) There is plenty of evidence [of the plot] that has already been shown, and more will be gradually shown.”

The most significant aspect of this conspiracy claim is the date: In 2010 Chávez was still president of Venezuela. In June 2011 he announced he was suffering from cancer. Only in December 2012, shortly before his death in March 2013, did Chávez publically endorse Maduro as his chosen successor.

Therefore the argument implies one of two assumptions: either in 2010 the plotters of the magnicidio had foreknowledge of the complete chain of events for the next three years –a possibility since the government claims that Chávez’s cancer was “inoculated” by his enemies, - or the conspirators had originally planned to kill Chávez but then simply re-plotted the plan to kill Maduro after March 2013.
Publicado por Hugo Pérez Hernáiz en 5:07 AM No comments:

The “It all began with the magnicidio of Chávez” Radio Show


The introduction to this radio program from the “Political School El Arado y el Mar,” published by the chavista web page Aporrea says:

“The political crimes ordered and executed directly by the United States and its allies, such as Israel and the Western powers, are a constant in our history. Ever since the murder of Christ, in the hands of the Roman Empire, up to our times, there is a long list of popular leaders that have been, openly or secretly, killed by Imperialism.

“The magnicidio [assassination] of Chávez was one of these crimes, there is no doubt of that, it is absurd to believe something different.

“Now, after his death, we have entered a period of turbulence that threatens to change the course [of the Revolution]. But this historical cycle cannot end in fascism, in social democracy, in pacts; this would all amount to a new magnicidio. What this revolution needs is to return to the beginning of this historical cycle and analyze the causes and consequences of the magnicidio, and to take appropriate measures and necessary corrections."

The commentators explain that it is unnecessary to waste time discussing the evidence that Chávez was assassinated, since the evidence is in itself “forceful” [contundente]. Besides, says one of the commentators, “Chávez himself already spoke about this, so really there is not much else to argue. [Palabra de Chávez…]”

Most interesting in terms of the construction of a conspiracy theory: the commentators stress repeatedly that the important issue is not to prove that Chávez was assassinated –“we could waste several programs on that point”- the issue is to discuss who and why he was killed. The host of the show makes the point that, even within the chavista leadership, the attitude assumed on the issue reveals your political position on the revolution: failing to give the appropriate importance to the need to investigate the death of Chávez is indicative of a “social democratic tendency,” or worse. 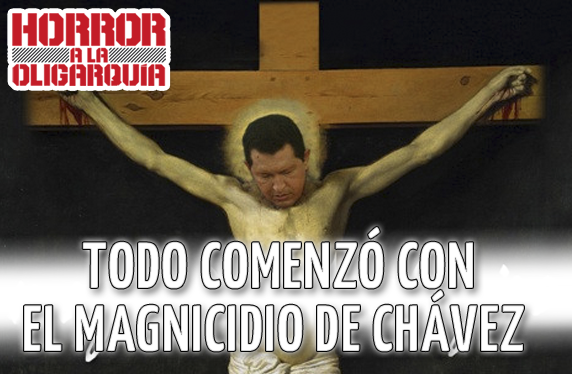 
The Foro International Conjura Mediática Contra Venezuela, organized by the government, began today in the Teatro Teresa Carrreño of Caracas.

In his opening speech Venezuela’s Foreign Minister, Elias Jaua, has told the audience that “politics has still its biggest challenge in the construction of a defense system against the media plot by international media that with the support of the extreme right, is trying to destabilize Venezuela.”

As an antidote to this media plot against Venezuela, Jaua proposes concrete measures: “the counter-plot [contraconjura] of real policies, the policies constructed by Hugo Chávez, the ones that president Maduro is also constructing every day, the ones we are constructing as a People. (…) The construction of realities is the best antidote against the imperialist, fascist, media plots.”

Journalist and National Assembly Deputy, Earle Herrera, explained in a TV interview in preparation for the Forum, that the media plot against Venezuela is part of a “fourth generation war”: “Never a country has been subjected to a media bombardment like the one we are living in our country. But it’s not only the media, it’s the whole cultural industry, or better said, the counter-cultural or sub-cultural [industry] which has dumped [everything] using diverse actors against Venezuela.”

Fortunately, according to Herrera, the media plot has so far been unsuccessful because “the Venezuelan people had a great pedagogue. And that pedagogue was president Chávez. Today our people can not only read newspapers, watch TV, and listen to the radio, they also know how to take the news reports apart; knows how to analyze, distinguish, and digest them.

According to the Agencia Venezolana de Noticias, Earle Herrera will address the Forum today with a talk on the theme “Transnational Media as an Instrument for War and Research in National States.”

The Forum will continue tomorrow and will include Venezuelan and international speakers who will debate issues such as “the psychological war as an apology of terrorism” and “the demonization of the social organizations of the Revolution in social media sites." 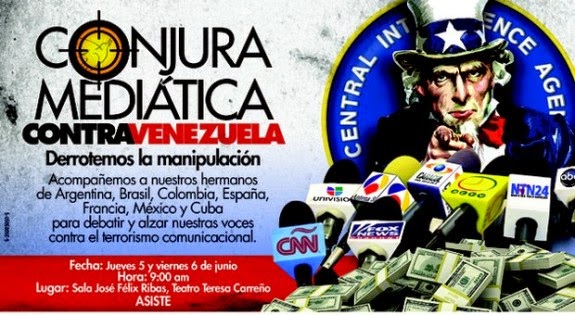