In an essay commemorating the 62nd anniversary of Chavez’s birth, Argentinian author Atilio Borón says he is convinced the late president was assassinated. Borón claims that because of his achievements Chávez became “public enemy number 1 for the Empire.”

“That’s why they killed him, as is slowly being confirmed by the complex puzzle of evidence supporting this hypothesis. It won’t be long before we have concrete and definite evidence of this magnicidio. We know where the intellectual perpetrators live, we know the motives behind their vile decision, and we also know that Chavez’s death is inscribed in the long list of popular leaders assassinated in the five continents by the ‘serial murders’ in Washington.”

Borón has often subscribed to the thesis that Chávez was “inoculated” with cancer by his enemies. His own contribution to the theory is the idea that the CIA has been developing technology to inoculate cancer cells or to generate heart attacks in its enemies since the 70s which could be transmitted using a microphone. In an interview in August 2015, Borón said that “with the technological advances that there have been, I have no doubt that this people [the CIA] could have developed a vector to generate cancerogenic processes trough malign cells. (…) A trustworthy scientific source confessed to me that there are methods for activating radioactive processes of malign cells contained in a microphone, that could have been placed in front of the Head of State and that could have been activated by some sort of remote control to introduce the lethal microscopic particles.”
Publicado por Hugo Pérez Hernáiz en 4:26 AM No comments:

The hashtag #GuerraNoConvencional is number one Twitter trending topic today in Venezuela. Among much re-twitted items are four infographics explaining what the Venezuelan government says is a non-conventional warfare being waged against the country by its enemies.

The seven phases of the non-conventional warfare are described in the first infographic. In the first phase, the resistance (the opposition), with the support of the United States “conducts the psychological preparation of the population against the stablished government.” Following phases are conducted by Special Forces of the United States infiltrated in the country. They train “resistance cadres” which will conduct the final phases of “minimum combat” (I think they mean guarimba street protest by this.) 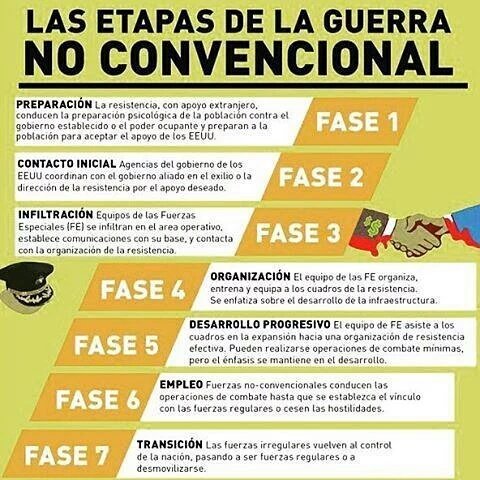 The second infographic explains several aspects and actors of the non-conventional warfare. “Imperialism” seems to be the dominant figure here. It coordinates everything form Colombian paramilitaries, infiltrated by “sectors of the national ultra-right” in order to commit crimes and terrorist actions, to local scarcity of basic products and sabotage of the electric grid. Included in this vast conspiracy controlled by the Empire are CNN and the “Bogota-Madrid-Miami axis.” 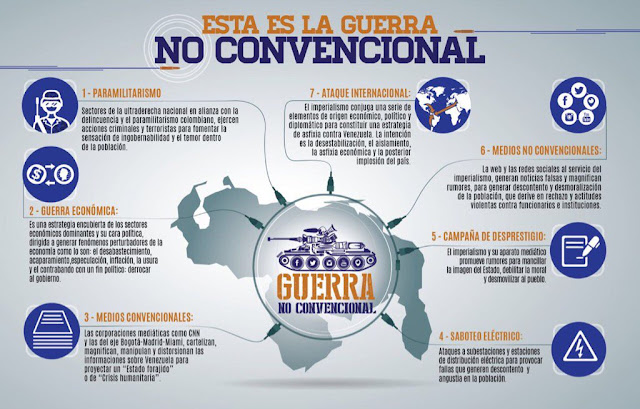 Infographics 3 and 4 deal specifically with the economic war. Parasitic business are linked to inflation and hoarding. Also, fracking and the black market dollar are thrown into the conspiracy equation. “Venezuela is the victim of a plan to internally sabotage the production and distribution of regulated food product,” is explained in the last picture. 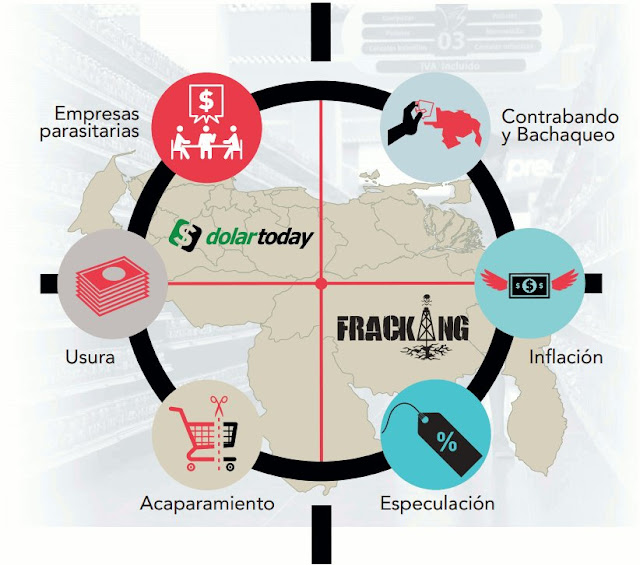 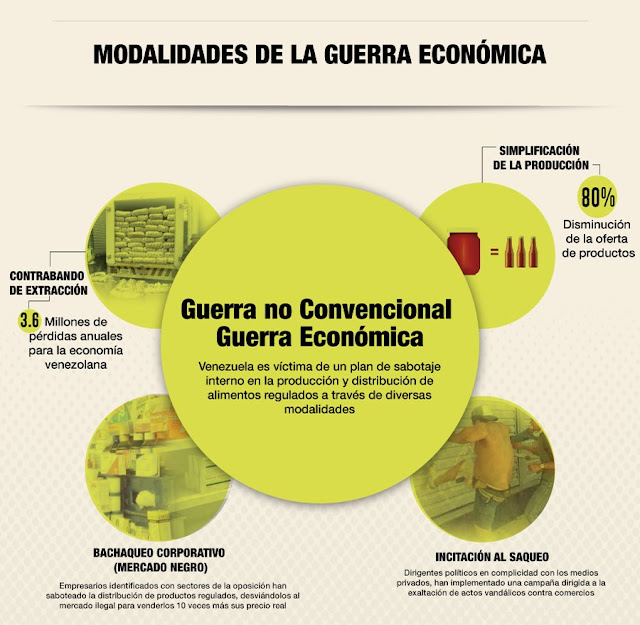 There is only one way, according to president Maduro, to defeat the economic waged by the Empire and its local lackeys against Venezuela, by giving almost total powers over the economy to the military.

“The time has come, military brothers” said Maduro yesterday, “the time has come, compatriots, to win the unconventional war, by using production, work, peace, and the establishment of a new social and economic order, based on the culture of work and with one objective: solidarity, coexistence, peace, social happiness, in one word, socialism.”

This new order, explained the president, “is a virtuous system which will replace the savage and capitalist chaos imposed by parasitic factors of commercial capitalism, which have done so much harm to our people and our country.”

To lead in the construction of this new order, Maduro has named the Minister of Defense, general Vladimir Padrino López, as the commander of the new Great Mission for Sovereign and Secure Supply, which will be in charge of all matters related to production and supply in the country. Padrino López has been granted powers to make economic decisions in “real time”, and will respond solely to the also new Presidential Military Command, headed by Maduro.
Publicado por Hugo Pérez Hernáiz en 7:05 AM No comments:

State media through the eyes of a BBC correspondent

Former BBC correspondent in Venezuela, Juan Paullier, was back in the country for some days last week and decided to only watch the public TV channel Venezolana de Televisión (VTV).

Paullier was subjected to a 24 hours fare of conspiracy theorizing. This is part of his account:

[To watch only VTV] was to wake up in the morning listening to talks about “induced scarcity” and “non-conventional warfare,” to spend the afternoon seeing a conspiracy by the international right against the country, and going to bed with a discourse about an attempt to force a foreign intervention in Venezuela.(…)

At night the presenters of the program Zurda Konducta speak of Chavez’s “assassination” by the United States, and of a strategy by the opposition and business owners to “starve the people to death” and to force a foreign “invasion.”

You don’t have to be in Venezuela if you want to try Paullier’s experiment yourself: Watch VTV live via internet.
Publicado por Hugo Pérez Hernáiz en 12:19 PM No comments: