As if Venezuelan migrants to Peru didn’t face problems enough, Óscar Pérez, the president of an NGO in that country called Unión Venezolana en Perú, suggests that the “rise in criminality” in Peru is part of a plot by Nicolás Maduro to “discredit migrants.”

According to a local Peruvian news portal, Pérez finds the frequency and violence of crimes by Venezuelan “social predators” in Perú suspicious, and sees a “political motivation” behind it:

“We are concerned by how common this is, there is not a single day in the news without a Venezuelan acting in a criminal way (…), this seems something predesigned with the aim of discrediting the exodus and the migrant population refugee in the country, and thus create a problem for the Peruvian state.”

Pérez also asked Peruvians to realize that the “immense majority of Venezuelans here in Peru are good people.”

In July this year, opposition leader María Corina Machado suggested that the Venezuelan “regime has managed to infiltrate some of these groups of migrants with what they call ‘social movements’, individuals whose objective are to destabilize democracies in our region.”
Publicado por Hugo Pérez Hernáiz en 3:14 AM No comments:

In 2006 Hugo Chávez first doubted the official version of the 9/11 2001 attacks. According to Associated Press, Chávez said:

“The hypothesis is not absurd ... that those towers could have been dynamited,” Chavez said in a speech to supporters. “A building never collapses like that, unless it’s with an implosion.”
“The hypothesis that is gaining strength ... is that it was the same U.S. imperial power that planned and carried out this terrible terrorist attack or act against its own people and against citizens of all over the world,” Chavez said. “Why? To justify the aggressions that immediately were unleashed on Afghanistan, on Iraq.”
Chavez has said the U.S. launched those wars to ensure its political and economic power.

Since then, every anniversary of the attacks government media carries stories suggesting the plausibility of conspiracy theories about the events (See previous years here, and here.)

Yesterday, Agencia Bolivariana de Noticias published this piece by Rosiris Ortega, “11 September: The Twin Towers and the Beginning of a War.”
According to Ortega, the official story of terrorists crashing planes against buildings is “a story bearing more doubts than certainties.”

Her main source for these doubts is the Italian documentary “ZERO INCHIESTA SULL’11 SETTEMBRE”, available in YouTube subtitled in Spanish.

Writes Ortega: “Victims and witnesses assured they had heard various explosions inside the buildings, minutes after the collapse, and [several explosions] before the total collapse, seemingly organized, as has been claimed by several engineering and architecture experts in the documentary EEUU-11 Septiembre. El complot de la CIA contra su Propio Pueblo.” (My assessment of the engineering expert community advancing these theories can be read here.) 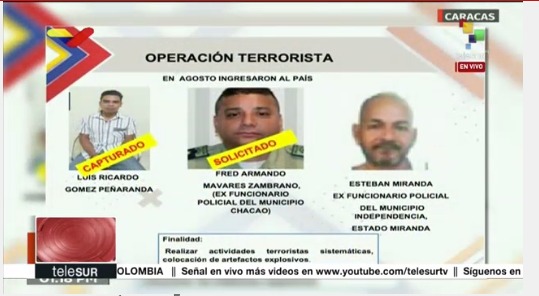 Communications, Tourism and Culture Vice-president Jorge Rodríguez said yesterday that the government’s “intelligence apparatus” has revealed a terrorist plot to blow up the Miraflores presidential palace and the headquarters in Cotiza of the FAES (police Special Forces), with C-4 explosives.

“Members of the Popular Power noticed the existence of suspicious looking bags which had been left at the Cotiza headquarters of the FAES and in the area of 23 de Enero [building complex]. They contacted the Explosives Division and realized they [the bags] were filled with C-4 ready to explode,” declared Rodríguez.

The bags were found on August 17, but curiously the Vice-president said the explosives were set to go off sometime “during the next 15 days.”

The terrorist plot, according to Rodríguez, includes Luis Ricardo Gomes Peñaranda –a Colombian national arrested on August 29 and charged with possession of explosives-. Interrogated, Peñaranda said that opposition leader Julio Borges (Residing in Colombia and recently appointed as Foreign Minister by National Assembly appointed president of Venezuela, Juan Guidó) is the mastermind of the plot. Cliver Alcalá Crodones (“alias César, chief of Colombian terrorist unit,” according to AVN,) and Rayder Ruso (alias Pico”, implicated in the attempt against Maduro of August 4, 2018,) and two ex-police officers, are also part of the plot.

Peñaranda also revealed the “exact coordinates” in Colombia of three paramilitary camps where terrorist are being trained “to assassinate Venezuelans and generate chaos [zozobra].”

“Colombia is required to act against these paramilitaries (…): more than 200 armed men are being trained in Colombian territory,” concluded Rodríguez his press conference.

Later during the day, Executive Vice-president Delcy Rodríguez later declared that “Venezuela will present the United Nations with overwhelming evidence of the protection and shelter by Iván Duque of terrorist groups, trained and armed in Colombia to, with his [Duque’s] consent, attack our constitutional order, in violation of Resolution 1,373 of the Security Council.”

Defense Minister, Vladimir Padrino López, also weighted in: “I reiterate that Iván Duque and Guillermo Botero [Defense Minister of Colombia], apart from their cynical politicking, suffer from astounding blindness: they refuse to see the conspiracy permanently plotting in Colombia, under their sponsorship and concealment, against the fatherland of the Liberators.”

The accusations against Colombia come in the wake of the announcement by a dissident faction of the Colombian FARC to again take up arms. Maduro had previously announced that Iván Márquez and Jesús Santrich, leaders of this FARC faction, would be welcomed in Venezuela. Foreign Minister of Colombia, Carlos Holmes Trujillo, said his government believes the two leaders are in Venezuelan territory and has asked for them to be handed to Colombian authorities.
Publicado por Hugo Pérez Hernáiz en 4:57 AM No comments: