(Image taken from the blog Descubre lo Imposible)
In December 2013, an article published by Revista SIC, a Venezuelan monthly linked to the Jesuits, warned that the order was becoming the target of conspiracy theorists after the appointment of Jesuit Pope. Most of those theories were reissues of plot stories that date back to the XVIII century. The election of the Venezuelan Arturo Sosa as the Superior General of the order has also fueled theories that the Bolivarian Revolution is a brain child of the Jesuits, part of their global strategy to impose the communist Project of the Paraguay missions left unfinished since the XVIII century.
Many youtube videos and blog articles claim to show this link. Here is one example by Jorge Guerra.

And here is a very long and interesting twitter line published on December 30, 2017 by @GiuseppeNoc, who claims to be writing a book on the subject. The first 43 of the 45 tweets seem to come from information taken from this blog article, but the two last ones make the claim for the link with XXI century socialism:
Giuseppe N. @GiuseppeNoc
0 In this TL I want to talk about the church, in a different context to the usual one. I will talk about the relationship of faith, #Vatican and #Jesuits with what is happening today in Latin America, especially the neo-communist, socialist and progressive currents
20:00 - 30 dic. 2017

1 I consider it is important to do so, because many people think that the church and these tyrannical currents are not related nor they never had anything in common. But in reality, you will see that it is not like that. Here we go:

2 First of all, let us understand something: just as everyone wanted to be friends with the Roman emperor, EVERY leader wants to be a friend of the Pope, and no matter the creed, EVERY politician wants to gain the confidence of the current Pope. The keyword is: INFLUENCE.

3 And it is not a tiny thing; With more than 1,000 million faithful and impressive amounts of churches in the world, their influence is impassable. It has been of course, throughout history. The church, therefore, is on the map of world influence.

4 In the past, for example, between the 12th century and the beginning of the 18th century, the influence of the church was easily noticed, because the Popes came from important families of that time such as Conti, Medici, Orsini and Borgia (or Borja) and others.

5 If you review the long list of Popes in those times, you will notice, the repetition of family names and family ties. Prominent families, who had a life of privileges and I mean riches, of course.

6 Let’s see, in XVI century, something important happened for the church and the world. Ignacio de Loyola, spanish, founds MILITES CHRISTI, better known as company of Jesus or the JESUIT ORDER, with the aim of being "missionaries of the Christian faith and helping evangelize."

7 #Jesuit, IGNACIO DE LOYOLA, the founder of the Jesuit Order, was not a priest, but a high-ranking Spanish OFFICIAL: that is, a MILITARY. Do you mean that the Jesuits at the beginning were armed with a sword under the habit? Yes! Literally

8 In a short time, the success of the Jesuits in the achievement of new "faithful" (note the quotes) was so resounding, that the church gave more and more support, to continue with such a "pristine" mission. It is worth mentioning, EDUCATION, as a strategic point of the Jesuits.

9 So much so, that only after 50 years of its foundation, the Jesuits already controlled hundreds of schools. And after 200 years, there were more than 700 schools administered and controlled.

10 As a good military man of origin, Ignacio De Loyola and those who followed him, they had created a structure that subtly and efficiently recruited members required for the expansion of their own order (beyond the simple evangelization proclaimed initially).

11 Will you wonder how they did it? Immorality, intrigues, frequent crimes and much greed. You see, the Jesuits were not very dear, where they arrived, sooner or later, countries ended up expelling them, of course, when they discovered the indoctrination plans.

12 To give you an idea of Jesuit greed, in 1647, Pope Innocent X said "all the wealth of South America is in the hands of the Jesuits." You wonder what this has to do with the initial topic of communism?

13 In Paraguay from XVI century, Jesuits implemented Reductions (communes) of Guarani Indians under their control, resulting in an experiment that much later would be known in Russia as COMMUNISM. In Paraguay, it was where they created a revolutionary guerrilla for the first time

14 How did the Jesuits found their first guerrilla? In 1750 Spain and Portugal signed a treaty, to establish limits in the South American colonies. Portugal kept the territory where the Jesuits worked exploiting and enslaving the Guarani indians.

15 The Jesuits, of course, were not going to renounce their lands and plantations, so they literally armed their converted Guarani and waged a prolonged WAR OF GUERRILLAS, they obtained the victory and retained the territories "for Spain" (note again the quotes).

16 Would not it have been easier to negotiate with Portugal and stay in those lands? Unlikely, because the Marquis of Pombal, prime minister of Portugal was against the papacy.

17 After the war in Paraguay, the Marquis expelled all the Jesuits from Portugal and their territories, and got Pope Benedict XIV to investigate the Society of Jesus. Something he must have been noticed.

18 The (strategic) error of the Jesuits in Paraguay, produced sequels in Europe, which led the Order to be investigated in several countries. In France they withdrew their property, in Spain, they forbade Jesuit establishments throughout the peninsula and colonies.

19 Governments of Parma, Naples and Malta banished them. King Charles III captured thousands of Jesuits and sent them to Pope Clement XIII who was being pressured by the main European courts to suppress the Order.

20 When Pope Clement XIII was about to approve the definitive suppression of the Order, the pontiff died poisoned (!). With such bad luck for the Jesuits, that Pope Clement XIV immediately came to know the cunning plan, including the issues of resource management.

21 Pope Clement XIV then proceeded in 1773 to expel the Jesuits (ALL) from the Vatican. The strange thing is that a year later, this pope also died poisoned. How weird isn’ t it?

22 The Jesuits (illegally), thanks to the Tsar, continued to operate in Russia, the only country that not complied with the suppression. The Jesuits (as usual) sought that the education of the Russians will remain in their hands, even when the Tsar professed religious freedom.

23 Finally, they succeeded in converting various members of the Tsar's family and some of his ministers to Catholicism, which caused, among others, that the Tsar banished them in 1820 from all Russia.

24 #Jesuits swore to return. Remember that a century later they took revenge on the tsar's house bringing the Bolshevik revolution to Russia, plunging the Russian citizenship into socialist slavery, the same plan they had already tried in the viceroyalty of La Plata (Paraguay).

25 The expulsion of 1773, did not last long. In the early 1800s a process of "restoration" was carried out, and the Jesuits were again admitted into the Vatican organization. And at 1824 Pope Leon XII, gives to the Jesuits the power over the educational system (formal delivery).

26 With the management of the educational system, in a complete and integral way (not only schools), they define everything. The education system of today, the years of studies, subjects, areas of knowledge, ... follows the same postulates of the Jesuits of 200 years ago.

27 Since 1870 as well as schools and institutions for children and young people, Jesuits have authority over all Catholic Universities of the world.

28 Contrary to their military origin, the Jesuits preached the doctrine of Jesus, it was to be expected, therefore "turn the other cheek", "love your enemy" and everything else ... it was as normal as all days, obviously only for the faithful ...

29 The Jesuits preach the gospel, with a variant : instead of the traditional story of sin and salvation, the “ignacian” /jesuit culture seeks to "empty out" of the sinful aspect (they say they achieve it), to allow the body to enter of Christ (in that existential void).

30 A part of the existential vacuum, is to have (according to them) the "authentic" existence, through obedience to the hierarchy. Obedience that is also absolute; If the superior tells you that white is black, there is no right to reply. For that they have, they do "exercises".

31 The other part of the search for "emptied" indicates that besides obeying, it must be filled with knowledge, in order to be able to command. Obeying for a Jesuit means obeying what hierarchical authority commands at that moment. Notice they seem, of course, a military order.

32 It is very common for the authority to order a jesuit to command, in a specific area, where his mission will be. That’s why, if you have the opportunity to meet a Jesuit, you will know that they are highly trained and prepared people, for command and direction tasks.

33 Consequently, the Jesuits have extensive knowledge in different branches of the human arts, almost all btw.

34 On the other hand, it would be very difficult to achieve this effect of control, in adults with their own education. An adult person, already formed, who can not easily be led to the state of "emptiness" preached by the Jesuits.

35 This is the fundamental reason, why, to control education from an early age, was the key, so that the Jesuit strategy devised by its founder, could have the expected success.

36 Historically, beyond the Pope we all know “white Pope”, there is another figure that is known as the "black Pope", it is the GENERAL OF THE COMPANY OF JESUS or Father General. He is the most influential person after the Pope we know.

37 There have been 31 of these GENERALS throughout the almost 500 years of existence of this congregation. Remember, the Jesuits were not born of a priest, but of a soldier.

38 It is important to say that the current Pope is Jesuit (Bergoglio) and Father General is of course a Jesuit, venezuelan Arturo Sosa and a long list of Jesuits in many countries, are provincial fathers or apostolic nuncios or presidents of their respective Episcopal Conference.

39 This situation, where both supreme heads of the Vatican are Jesuits, is certainly the first time that it occurs in the 2000 years of the church.

40 In summary the Jesuits have taken POWER in the Vatican on almost all local fronts (within the Vatican City), as well as the international fronts (the respective countries).

41 It was the Jesuits who carried out the first social experiments in South America, practical trials that decades later, would be known in Russia, as communism.

42 Marx, Lenin, Stalin and other characters were trained by Jesuits, as is (it is said) Fidel Castro Ruz. Therefore, we are in the presence of tyrants, who were trained, by expert investigators of human behavior, throughout history: the JESUIT.

43 It must be understood that the Jesuits have been: a- Influence on politics and economies in many countries b- Precursors of socialist and communist projects and similar ideas c- (Today) They are aligned with modern agendas considered globalist

44 In this resurrection of communism (misnamed SSXXI), it must be understood that faith, the divine, the paranormal, or just praying, will not serve against tyranny. Because the tyranny of the SSXXI has the experience of +500 years knowing its victim.

45 Only by knowing the true enemy, (SSXXI socialism of XXI century for his spanish abbreviation) with strategic and forceful actions, truly uniting the citizenship, against the oppressive forces, will we be able to dream again with freedom. 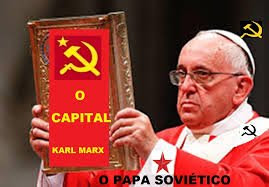